Wikitroid
Register
Don't have an account?
Sign In
Advertisement
in: Pages with conjectural titles, Rooms, Area 8, Save Stations

The "Final Purple Liquid Tunnel" is an unnamed room featured in Metroid II: Return of Samus and Metroid: Samus Returns.

This long, winding room is located in Area 8 of SR388, and is explored during Samus Aran's mission to exterminate the Metroids. It is located at the area's entrance in both games, and is the first room of Area 8 in Samus Returns, where it has an Elevator connecting back to Area 7. It is a lengthy tunnel that winds left and right as it ascends higher and higher towards the first liquid-filled hall.

Notably, this tunnel is the final room in SR388 to contain purple liquid. In Return of Samus, it is flooded while Samus is exterminating the Omega Metroids in Phase 8, but an earthquake will completely drain the deadly liquid before Samus is required to enter this room. In Samus Returns, purple liquid can still be seen in the background, and the room has the characteristic aesthetics of other purple liquid tunnels, such as dark gray rock and thick purple mist.

In Samus Returns, the background of the tunnel is detailed with the crumbling ruins of Chozo architecture, including statues similar to those seen near the landing site on the Surface. While the Elevator and a Save Station are both among the Chozo's creations, this room notably lacks a Chozo Seal, since there is no longer any need to drain more purple liquid. The layout of the room includes ceilings of breakable Screw Attack Blocks, with narrow Glow Fly-infested vents to bypass them without the Screw Attack. The room is mostly guarded by the Chozo security system robots (including Black Autracks, which make their debut in this room), although a juxtaposition of weak Glow Flies and powerful Electric Gulluggs also inhabit the tunnel.

In Return of Samus, this room has a unique feature designed specifically to prevent Sequence Breaking before killing the Omega Metroids. If Samus has the Varia Suit and at least five full Energy Tanks, she can endure the purple liquid long enough to reach the top of the long, winding room. However, the entrance to the liquid-filled hall is blocked by a lowered ceiling lined with stalactites, with no way to break through or bypass the barrier. With no enemies or Big Energy Balls in the room, Samus cannot restock on energy and will certainly die if she attempts to return to Phase 8. These stalactites automatically disappear when the Omega Metroids are killed and the purple liquid drains for good. In Samus Returns, Samus cannot enter this room before killing the Omega Metroids, since the Elevator in Area 7 will not function until the purple liquid is drained; therefore, no such barrier is necessary to prevent Sequence Breaking.

Ironically, a new glitch in Samus Returns allows a massive Sequence Break to be possible in this room. By using the Spider Ball on the elevator platform, Samus can go out-of-bounds and enter a Hidden World. Careful Space Jumping can lead her all the way to the elevator leading back up to the Surface, thereby skipping Area 8 in its entirety.[1] This Sequence Break is used by the current Any% speedrun world record.[2]

In Return of Samus, the room connects to another tunnel initially flooded with purple liquid, which connects back to Phase 8. In Samus Returns, the tunnel connects (via Elevator) to the last purple liquid tunnel of Area 7.

AREA 8 (pg. 192-193)
"The path to the end of this long, winding room isn't terribly complicated.
Head east, then climb up the corridor on the room's east end. Space Jump your way up to avoid getting stopped by the Screw Attack Blocks obstructing your path.
In fact, avoiding the enemies and Screw Attacking your way up the corridor is likely the most practical way to climb this tower. There are plenty of strong enemies along the route, and fighting them is a good way to burn through health.
Once you're at the top of the corridor, go left and pass through the door just ahead of the Save Station." 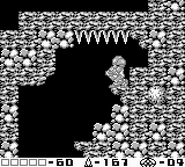 The stalactite barrier in Return of Samus

The Save Station in Samus Returns