Wikitroid
Register
Don't have an account?
Sign In
Advertisement
in: Pages with conjectural titles, Articles with non-canonical information, Rooms,
and 3 more
English

The "Fire-Sea Room" is a room in Norfair, seen in Metroid and Metroid: Zero Mission.

This room can be found in the lower right quadrant of Norfair, through a door hidden behind fake lava. In both games, this room consists of rocks and metallic platforms floating over a lake of lava. A single Air Hole can be found in one of the floating rocks, from which Gamets will continuously spawn. At the far end of the room, an artificial metal pedestal can be found, with a tank expansion (Energy Tank in Metroid, Super Missile Tank in Zero Mission) resting on top of it.

In Zero Mission, the room has been expanded. Visual details in the background depict brick walls and collapsed pillars, like in other rooms of Norfair. Freezing a Gamet on both sides of the pillar holding the item, and using it as a platform will aid Samus in collecting the item. Samus can now break through the left wall of the room, revealing a hidden tunnel leading to a Missile Tank. The tunnel is long enough for her to activate her Speed Booster and use a Shinespark to quickly reach the exit of the room.

Energy Tank
In Metroid, an Energy Tank is found resting on a metallic pillar above the lava. This is the same Energy Tank depicted in Captain N and NES Remix 2.

Missile Tank
In Zero Mission, a Missile Tank can be obtained by breaking through the left wall and exploring the tunnel beyond.

189 super missile tank (pg. 71)
"A Super Missile Tank rests on a pillar. Stand next to the nearby pipe and wait for a beast to pop out. Run to the left, drop to the lower block and freeze the enemy after it passes. Use it as a platform to get to the prize."

189 missile tank (pg. 71)
"After the enemy platform thaws, it will continue its flight. When it reaches the left side of the pillar, freeze it again. Drop to it without engaging your Screw Attack and use your beam to expose a ledge in the wall to the left. Jump, roll, run and collect another Missile Tank at the end of a short corridor."

190 SPEED-BOOST BACK (pg. 71)
"Run to the right from the spot where you collected the Missile Tank. When your booster is charged, kneel to stop, then tap the A Button, hold Right and take off for a quick flight to the right side of the corridor."

In the Captain N: The Game Master comic story Money Changes Everything, Samus leads Kevin, Kid Icarus, and Princess Lana into a large cavern in Norfair. Upon entering the room, she is immediately attacked by Gamets, and her damaged Power Suit is in danger of exploding. Therefore, Kevin uses his experience playing Metroid to navigate the room and acquire an Energy Tank.

The room depicted in the comic has floating rock platforms over a lake of lava; a swarm of Gamets coming out of a hole in the floor; and an Energy Tank on a metal pedestal at the end. Since all of these features are found in one specific room in Metroid, it is possibly intended as a faithful depiction of this room.

Kevin and Kid Icarus both refer to the "fire-sea" when describing this area. This same term is used in the manual of Metroid. In both instances, "fire-sea" is most likely merely referring to the lava that is present throughout Norfair, including in this room.

This room is featured in a Metroid minigame in NES Remix 2. In Stage 8-2 "Collect the Energy Tank!", Samus must collect this room's Energy Tank within 100 seconds.

Gamets in Money Changes Everything. 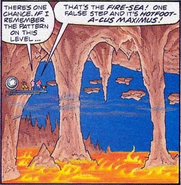 The fire-sea in Money Changes Everything.