Flaahgra is an enormous mutated plant-like creature in Metroid Prime and is the main boss of the Chozo Ruins.

Flaahgra was likely once an ordinary plant, perhaps even a sacred one, as it had the honor of being the Chozo's centerpiece flower in their city's Sunchamber on Tallon IV. However, the destructive Phazon mutated it beyond all recognition, resulting in this monstrous beast.

Flaahgra extended its vile roots to all corners of the Chozo Ruins, and began to secrete a poison which tainted the waters of the Ruins. The water was so toxic and corrosive that it dealt damage to Samus on contact, though it was completely cleansed the instant Flaahgra was defeated.

Flaahgra begins the battle with one solar panel active. If Samus can disable it with Missiles or Charge Beam shots, she can switch off the Mirror Arrays that give Flaahgra the sunlight from FS-176 that it needs to stay active and functional. The creature can use its scythe-like limbs to flip over the arrays that Samus has disabled to restore power to them if she is too slow to shut off all of them. When all solar arrays are shut off, Flaahgra will collapse and its four spiked Tentacles retract into the large flower's base, allowing Samus to enter Morph Ball-sized tunnels previously occupied by the Tentacles. Once she reaches a Morph Ball Slot located on the outer edge of the creature's base, she can Bomb it, causing damage not only to Flaahgra's central nervous system, but also igniting the flower with the surge of electrical energy. After the blow has been dealt, the upper body of the Flaahgra will writhe, wilt and retreat into the main flower. Seconds later, however, the solar panel(s) powering it will reactivate, plus an additional one (starting with one, with a maximum of all four panels being lit at a time), causing the Flaahgra to emerge a few seconds later, larger and angrier than ever.

In terms of physical offense, Flaahgra can slash with its enormous scythe-like appendages, performing a brutal swipe or two each time it decides to do so. If Samus takes too long to reach the Bomb Slot inside one of the four tunnels, not only will she be pushed back out by one of the Tentacles, but Flaahgra will awaken (due to the reactivated solar panels) and furiously perform an almost 360-degree slash across the floor of the entire room. Each of Flaahgra's four Tentacles are covered with thorns and will flail at Samus if she gets near them.

Its long range offense consists of spitting out small and large energy spheres. While the small ones are quickly spat out in different waves, the large energy sphere requires a moment to charge before being launched, though the process can be stopped if Samus shoots a Missile or Charge Beam shot at the creature's head. Flaahgra can also spray a substance that spawns a temporary wall of corrosive plants along the floor from the central pond to the nearest wall of the room. This wall occasionally proves impossible to jump over, hindering Samus' progress if she was on her way to a Mirror Array.

Lastly, the central pond surrounding the boss is extremely toxic and acts as a defense in a fashion similar to a moat protecting a castle. It is from here that all the polluted water is distributed throughout most of the Chozo Ruins.

Due to its exposure to the sun's concentrated energy, the outer shell of Flaahgra has become resilient enough to withstand harm from most weaponry, thus no matter how many shots are fired directly to the head and body, it will only be temporarily stunned, and can only be truly harmed by bombing its central nervous system. However, stunning its main body proves to be useful, as it not only allows Samus to disable the Mirror Arrays without being attacked, but also prevents Flaahgra from reactivating said Mirrors. After all four trenches have been bombed, the herbaceous monstrosity dies, and the Chozo Ruins' water supply returns to its normal, unpolluted state.

"Flaahgra is a massive plant-based life-form with a snake-like body and powerful arms. It gains its strength from sunlight. The tentacles it uses to attach itself to the ground are also used to absorb water. The creature's mutated hydration system pollutes the water source with noxious excretions, creating the perfect environment for Flaahgra's growth and nourishment. Flaahgra is extremely territorial, and will viciously attack any intruders."

Its central nervous system is located near its base, where sprawling tentacles are tightly affixed to the ground." 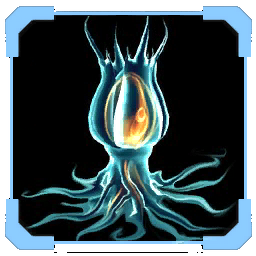 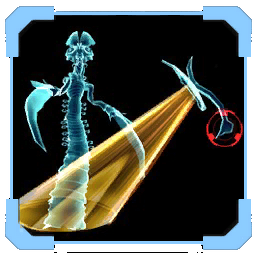 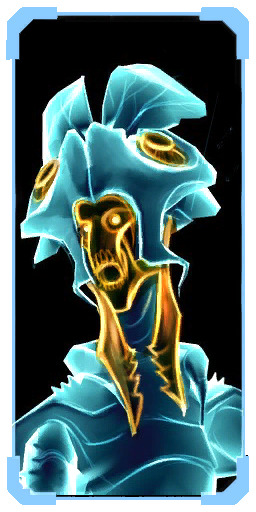 Morphology: Flaahgra
This mutant plant is the source of toxic water in the Ruins.

Flaahgra's growth cycle has been radically accelerated. As a result, it requires near-constant exposure to solar energy to remain active. This exposure has made Flaahgra's outer shell thick and durable. Concentrated weapon fire can daze it for short periods, but its lower root system is unprotected and vulnerable, however. Exploit this flaw when possible.

An early animation reel of Flaaghra displays it in an open swamp, rather than the enclosed chamber where it is encountered in the final game. 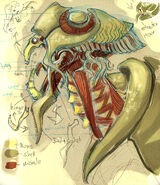 The central 'stem' and head of the plant.

The Flaahgra emerges after two mirror arrays are active.

One of the creature's projectile attacks.

Samus plants a Morph Ball Bomb in one of the slots at the base of the creature's root system.

The Flaahgra perishes in flames.

Toxic weeds appear then shrivel over the bud.

Purified water flows from the fountain. 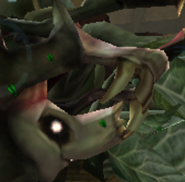