Fleet Admiral Castor Dane is the commander of the G.F.S. Olympus. His only appearance is in Metroid Prime 3: Corruption. He is known for his utmost dedication to protecting the Galactic Federation from its enemies. He is stern, aggressive, and has a strong dislike for the Space Pirates; his in-game scan hints at him having been orphaned by the marauding race at an early age, an act he still seeks to avenge.

Samus Aran meets with the Admiral along with Ghor, Rundas, and Gandrayda aboard the G.F.S. Olympus. He informs them that Aurora Unit 313 has been stolen by Space Pirates, and that a virus has been planted into the Aurora Unit network. He wants them to deliver a vaccine to purge the virus, though his speech is cut short when Space Pirates attack the Olympus fleet. He provides updates and assistance to Samus during the subsequent invasion on Norion through her comm system.

Later, Admiral Dane took part in the Federation's invasion of the Pirate Homeworld while giving Samus directions on disabling its defense system. This mostly involved giving orders behind the scenes. However, he personally escorted a group of Demolition Troopers onto the planet's surface. Later, they commandeered a hovering Leviathan Battleship and used it to open a wormhole to planet Phaaze, and also led the attack on it from the flagship Olympus.

In the end, one of his soldiers told him that Phaaze was beginning to explode. He ordered his entire fleet to warp back. After Phaaze's destruction, Samus has yet to be reported as a survivor, and Dane fears the worst. When her Gunship comes into view, Dane, happy to see she's still alive, salutes her while she writes a message saying "Mission Complete" on the screen. 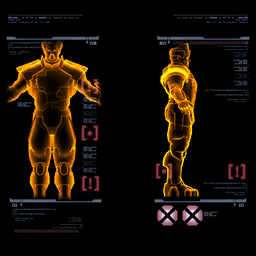 Morphology: Fleet Admiral Dane
Commander of the G.F.S. Olympus,
the flagship of the GF Starfleet.

Fleet Admiral Castor Dane is known for his utmost dedication to protecting the Federation from its enemies. He is stern and aggressive, and has a strong dislike for the Space Pirates. Rumor has it they orphaned him at an early age, an act he still seeks to avenge.

In concept art (see below), he was originally depicted as a cyborg with an artificial leg similar to that of a classical pirate.

In the original NTSC version of Corruption, during the Briefing Room cutscene, Dane says "Damn! They're targeting the planetary defense system!". In the PAL and Metroid Prime Trilogy versions, the "Damn!" was changed to "No!" Dane is the first character to utter a profanity in a Metroid game. In an interview with Shinesparkers, Dane's voice actor Timothy Patrick Miller said the change did not bother him.

Dane's appearance was different in an earlier version of Corruption (pictured right).[2]

Concept art of Dane with a prosthetic leg.

Dane ordering Samus to return to her ship.