The flooded cavern[1] is an enormous room in Crateria. It made its first appearance in Super Metroid, although chronologically it is first seen in Metroid: Zero Mission.

The flooded cavern is one of the largest rooms in Crateria. It is located directly outside the Wrecked Ship's crash site in Chozodia, and therefore features numerous fragmented walkways directly leading to a Green Hatch (Super Metroid) or Yellow Hatch (Zero Mission) entrance to the ship. These walkways cross over a lake infested with Skulteras. In Zero Mission, Samus briefly passes through the flooded cavern during her search for the Power Grip in Crateria's Chozo Ruins. The flooded cavern is entirely subterranean, with smooth blue rock walls in the background.

The room is significantly larger in Super Metroid, now encompassing a surface area in open-air with floating rocks and a narrow tunnel maze that drops down into the lake below. The sky is visible from within the cavern, and the lake is shown to extend into the background. Samus can now cross the gaps between the fragmented walkways using her Grapple Beam. The room's upper area cannot be directly accessed from the lower lake area, but instead through the upper doors of the Wrecked Ship. These additional areas are actually present in Zero Mission, but are no longer in the same room as the flooded cavern and are instead classified as part of the Chozo Ruins directly above the room. For more information about this section, see Chozo Ruins main cavern.

The destruction of the Space Pirate Mother Ship at the end of the Zero Mission most likely obliterated the Chozo Ruins and unearthed the Wrecked Ship, which may canonically explain the flooded cavern's more open nature in Super Metroid.

Missile Tank
In both games, a Missile Tank can be found in the bottom left corner of the flooded cavern. It is in a hidden alcove within the lake, which can be accessed by breaking through a Fake Block (Zero Mission) or Bomb Blocks (Super Metroid).

Missile Tank
In Super Metroid, in the upper area of the flooded cavern. Samus must ascend the floating rocks and Trippers to find the Missile Tank hidden in the highest part of the left rock wall.

Missile Tank
In Super Metroid, in the upper area of the flooded cavern. Navigating the Morph Ball maze will yield a Missile Tank resting on a pedestal on the left side.

B. A DIFFICULT TASK (pg. 37)
"Samus will have to ride the uppermost Tripper as far as she can to the left. When you get to the rocky wall, crouch down and shoot to reveal the location of a batch of Missiles. Stand on the left edge of the Tripper to be sure to touch the Missiles just before the platform reaches the rocky wall. It's a bit tricky."

MISSILES (pg. 21)
"There's some missiles concealed in the rocks up here and to the left, but they're not easy to reach. There's a couple of moving platforms going back and forth. Get onto the top one, edge as far to the left as you can without falling off then crouch down. As you approach the rocks, fire across to reveal the prize, then allow the platform to carry you into the icon, thereby collecting it. If you're not close enough to the left of the platform you may be knocked off by the overhanging rocks before reaching the missiles. If this happens you'll just have to try again!"

036 missile tank (pg. 37)
"Travel to the right from the elevator and drop into the water. Use bombs to blast through the lake's left bank, then run to an underwater Missile Tank. On the way out of the area, you'll have to blast through a block then wait for it to re-form to give you a boost to the shore."

037 CLIMB OUT OF THE HOLE (pg. 37)
"Some of the ledges above the lake are out of reach. Hop onto the ones that you can reach, bomb through a six-block barricade then follow a path that leads to higher ground, blasting obstacles along the way."

The broken walkways in Zero Mission 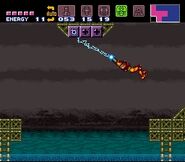 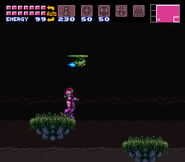 A Tripper in Super Metroid 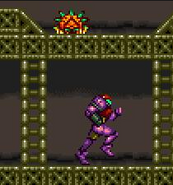 The Hzoomer in Super Metroid

The room in SMILE