Location of the crashed Frigate Orpheon

The Frigate Crash Site is a room in the Tallon Overworld. It appears in Metroid Prime.

Obviously, the Frigate Crash Site is where the Frigate Orpheon crashed. The room consists of the exterior of the crashed ship, next to a large pond. Opposite the frigate is a door leading to the Waterfall Cavern. When Samus first enters the room from the Waterfall Cavern she sees a group of Flying Pirates who, upon spotting her, flee. They leave behind two crates leaking Phazon, which is Samus's first encounter with the mutagenic substance.

To reach the opposite shore of the pond, Samus must enter the water, and cross to the other side. Underneath the pool on a ledge is a Morph Ball tunnel that leads to a small cave from which Samus can reach the shore. There are 2 Grapple Points above the water that act as a shortcut across the room.

Missile Expansion
This Expansion can only be reached if Samus has the Gravity Suit. It is found underwater, to the left of where Samus entered. The Expansion lies in a small cave in the rock face, near the submerged roots.

Flora
"This lichen seems to be giving off low levels of radiation. No matches found in flora and fauna databank."
Hole
"There is a small crevice detected at the base of this wall."
Frigate Orpheon
"Derelict Space Pirate ship that self-destructed in low orbit above Tallon IV. Faint life signs detected in interior."
Phazon crate
"This crate appears to be the same type of container found on the Space Pirate research frigate. The material seeping out from the ruptured metal is highly toxic. Analysis indicates this may be the 'Phazon' compound the Space Pirates were using in their biological experiments."
Injured Space Pirate 1
"Morphology: Space Pirate. Creature is critically injured. Cranial trauma indicates likelihood of brain damage."
Injured Space Pirate 2
"Morphology: Space Pirate. Irregular life signs detected. Massive internal injuries due to concussive trauma."

The two Flying Pirates examining the exposed canister of Phazon. 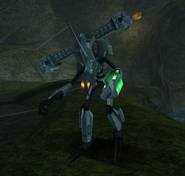 Survivors of the crash

A Pirate that sustained cranial trauma resulting in brain damage

One survivor of the crash with broken leg injuries near a stack of crates blocking the access door.

A view of the room from the front, showing the Phazon crate

Swarm of Beetles located near the Waterfall Cavern door.

The two Jelzaps housed inside the waters.