None; Samus loses her upgrades when leaving the spaceship

Orpheon is a Space Pirate frigate from which Samus receives a distress signal in Metroid Prime. It is the first area explored in the game. The vessel is operated by the Space Pirate Science Team as a transport and research vessel and was key in the transportation of Metroid samples from the fallen base of Zebes to the research facilities on Tallon IV. Other than Metroids, the vessel housed various other bizarre species that the Space Pirates were running tests on, most likely for militaristic purposes; the most notable being the Parasite Queen and reborn Ridley. Phazon could also be found on the frigate. The ship was crippled in orbit due to a fusion core accident (caused by a dying Parasite Queen falling into the Reactor Core). The frigate later crashed into the surface of the planet shortly after Samus defeated the Parasite Queen. Samus would later find the wreckage and have to traverse through it to reach the Phazon Mines.

The Orpheon is where the defeated Ridley was resurrected/rebuilt into Meta Ridley after his defeat on Zebes. It is also where Samus first encounters him (in his new cybernetic-enhanced form) during her escape from the crippled Orpheon. It is unclear exactly why Meta Ridley was still aboard as most of the able-bodied crew had evacuated six hours before Samus' arrival. He may have chosen to stay and guard the ship, or at the time still needed time to recuperate before moving.

In Super Smash Bros. Brawl the Frigate Orpheon stage is based on this area. A Parasite Queen watches from the background and the stage flips occasionally with the power occasionally going out (both similar to its crashed state).

The main area of the frigate, composed of three decks; by name, these are Alpha, Beta and Gamma, serving as the emergency evacuation, biohazard research, and propulsion areas, respectively. Samus lands here and traverses it to reach the Parasite Queen.

After the reactor core is sent into critical condition, Samus is forced to escape through this area of the ship.

Log 09.992.3 Zebes has fallen. All ground personnel are presumed dead, either killed by the Hunter clad in metal or in the subsequent destruction of the underground facilities. Our research frigates Orpheon, Siriacus and Vol Paragom were in orbit at zero hour and managed to retreat. Frigate Orpheon is now docked at Vortex Outpost. Orpheon's cargo appears to have a 100% survival rate: Metroids are healthy but on restricted feeding schedules due to uncertain supply status. We are ready to begin research on the Metroids and other promising life-forms. Security status remains at Code Blue: no signs of pursuit from the Hunter. 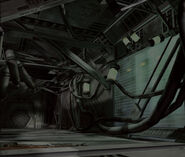 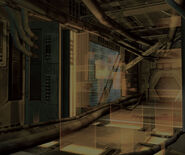 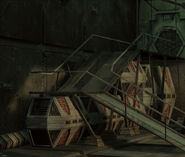 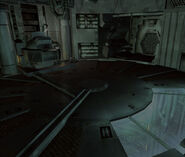 Samus battles the Parasite Queen in the Reactor Core

Samus escapes inside one of the many ventilation shafts in the Orpheon. 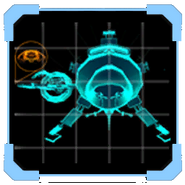