Please help improve this by adding Ridley's info by expanding it.
Much more information can be added to this article.

Samus's Front Air Attack is the Aerial Fire[3] (エアリアルヘルファイア?)[4]. Samus sticks her Arm Cannon downward and unleashes a series of four fiery explosions dealing 2-20% damage. Landing all four hits to an opponent is tricky, although the final hit can be chained with other moves. In Super Smash Bros. Melee, the total damage was buffed to 23%. However, in subsequent games the move's power has been heavily nerfed: to 18% in Super Smash Bros. Brawl, and further to 12.8% in Super Smash Bros. for Nintendo 3DS and Wii U.

Zero Suit Samus's Front Air is a double kick, with the second kick being faster and stronger. The first kick's knockback makes hitting with the second kick more difficult unless Zero Suit Samus uses upward and/or forward momentum from a jump to her advantage. However, she can land the second kick without landing the first with the right timing. In Brawl, the attack deals 6-11% damage, for a total of 17% if both kicks connect. Despite the addition of Jet Boots in Super Smash Bros. for Nintendo 3DS and Wii U, the attack deals 5-7%, max 12%, a nerf from the previous game.

An update for Ultimate on January 29, 2019 shortened the amount of time that Zero Suit Samus and Ridley cannot grab edges after using their Front Air Attacks.

Damage 1~5% Max Damage 11% : 5 Hits
Samus blasts her arm cannon in a downward arc in front of her. Can hit multiple times for a lot of damage.

Damage 5~7% Max Damage 12% : 2 Hits
Similar to her Side Smash, this attack has Zero Suit Samus use her jet boots to kick twice in front of her. 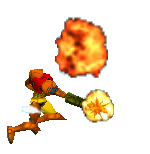 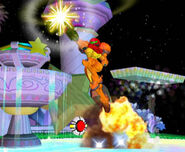 Retrieved from "https://metroid.fandom.com/wiki/Front_Air_Attack?oldid=271416"
Community content is available under CC-BY-SA unless otherwise noted.