Location of an Energy Tank, the Binary Subscripture, and the Shield Key; access to Sic Transit, Fault Line and Sanctorus

The Frost Labyrinth is, as its name implies, a labyrinth room on Arcterra. It appears in Metroid Prime Hunters.

Much of this room is frozen over and navigated in Morph Ball form. The entrance to the labyrinth is through a small tunnel in the wall of a chamber at the start of the room. This chamber is constructed from stonework, but has no ceiling; apart from rebar over the room, it is open to the sky. There are small patches of snow on the floor here, and above the tunnel is an Alimbic Emblem object, which can be scanned. There are two Petrasyls in this chamber.

The maze is located under a sheet of thick ice, through which it is possible to see crumbling architecture, poles, a collapsed pillar, snow and exposed rocks above. There are large cracks in the surface of the ice, but they are not indicative of weak points as the ice is indestructible. A Blastcap can be seen growing on the architecture, and one Zoomer crawls along it as well. It cannot be killed as the area above the maze is inaccessible in biped form. Throughout the maze are weeds, Zoomers, Voldrums and green laser projectors, many of which are initially inactive. Those that are active turn on and off, similar to Electric Gates in Metroid Prime 2: Echoes. Samus must wait for them to deactivate before moving past them or she will take a small amount of damage (eight units of energy).

Past a group of active lasers near the center of the labyrinth, Samus will come upon a break in the surface of the ice. A Shield Key is above. Using the Bomb-Trick to collect it will remove a seal on a Morph Ball Door near the left of the labyrinth. Samus cannot climb out of the maze through the hole. Through the Morph Ball Door is a tunnel leading to a cave with a Binary Subscripture artifact. Once collected, a pair of Force Fields in the maze (near where the Shield Key was collected) will disappear, giving Samus another path to an exit. Near the back and right side of the maze are two exits into small chambers with weeds and Red Blast Shields.

Binary Subscripture
To collect the Shield Key, Samus must find a dead end with a hole in it and the key above it. She must use the Bomb-Trick to collect it, and then pass through a previously locked chamber to find the artifact.
Energy Tank
Behind three green pulsating lasers.

One of the lasers, turned off.

Weeds growing on a wall in one of the exit chambers. 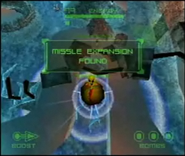 Early screenshot of Hunters, where a Missile Expansion is found in the Shield Key's place.
Community content is available under CC-BY-SA unless otherwise noted.
Advertisement