Wikitroid
Register
Don't have an account?
Sign In
Advertisement
in: Pages with sourced titles, Species, Zebes,
and 10 more
English

The Fune is a stationary creature that lives in the walls of Norfair's hot caverns; all that is visible of it are its head and its mouth. A Fune can launch blue-hot fireballs from its mouth when it feels threatened. The only way to kill this creature is with a direct shot from a Super Missile or a Power Bomb. Except for the lack of any visible optical organ(s), they share a great resemblance with Namihes.

"Vs. Namihe and Fune"
Chronologically, Other M is the Fune's first appearance since the destruction of planet Zebes. A single specimen is found aboard the BOTTLE SHIP in Sector 1 / Biosphere, alongside at least one Namihe. Unlike the Funes and Namihes on Zebes, which were seemingly passive predators, this particular duo are extremely aggressive and freely travel their environment rather than staying nestled within walls. These changes may be due to genetic manipulation by the Galactic Federation to create bioweapons, but their aggressive behavior is more likely the result of either the aggravating cries of the infant Ridley clone or the psychic influence of MB.

Samus fights the Fune and the Namihe together as a mini-boss in the Subterranean Control Room, sharing the same attack pattern as one another. At first they hide within the walls and ceiling, occasionally emerging to spit electric projectiles at Samus, reminiscent of their species' previous behavior. Samus must target the Fune in Search View and stun it with a Missile, forcing it to reveal itself.

At this point, the Fune is capable of temporarily entering a state in which it absorbs any of Samus' beam shots; once it has absorbed enough, it uses the energy to strengthen its own projectiles into a single blast that launches a spread of energy bombs. The Fune also has a grapple attack where it swallows Samus and then spits her out again. After enough damage, a Charge Beam leaves it stunned so it can be finished with a Lethal Strike. Missiles can still be used, but they do not stun the creature for a Lethal Strike, so it is less effective. If Samus takes too long to kill the Fune, it will hide back in the wall.

After either the Fune or Namihe is defeated, the other one becomes more difficult to battle. For example, the remaining creature will have a shorter Lethal Strike vulnerability window, and it will move faster between holes in the wall so it is harder to hit with a Missile.

Samus encounters X Parasite-infected Funes and/or X mimicking the creatures in Sector 3 of the Biologic Space Laboratories research station. The X-mimic version appears to have sacrificed durability (they can be damaged by charged shots and regular Missiles) in exchange for an extendable neck which they can use to lunge out of the wall when Samus approaches. Once extended, Fune can be frozen with Ice Missiles to make platforms. Fune can still spit out fireball-like projectiles that fly directly in front of the creatures.

Metroid Fusion suggests that Namihes are possibly mature Funes, as almost all X-infected Fune change into Namihe at a certain point in the game. Since the X Parasites often seem to imitate the natural behavior of their infected victims, they could have followed the natural evolutionary path from Fune to Namihe, similar to the Zeros maturing into Kihunters.

NAMIHE & FUUNE (pg. 161)
"These massive snake-like creatures attacks by poking out of alternating holes in the wall. Watch out for when their face appears. When it does, launch a missile and finish them off once knocked outside."

Bosses (pg. 18)
Namihe and Fune
"There are Namihe and Fume [sic] worms that live inside the BOTTLE SHIP'S walls. When they come out to attack, they know better than to expose their entire bodies. They peek their heads out, launch electric projectiles, and then retreat back into the walls. Shoot the worms while their heads are exposed and they will eventually wriggle out of their holes. When they rear up to unleash an attack, use your Charge Beam to stun them. When they drop, rush their heads and use Lethal Strikes to kill them."

Boss Battle - Namihe and Fune (pg. 62)
"Backtrack the way you came and stop to save your progress at the Navigation Booth just outside the next room. When you enter the next room, two tunnel worms come crashing out of the walls! This time, they don’t pass you by without attacking. They attack you with glowing orbs of energy from their mouths and occasionally come out of their tunnels to bite you!

Wait for the tunnel worms to pop their heads out of the wall and hit them with missiles. The missiles force them to retreat back into the walls temporarily. Move around the room until they begin to creep out again and continue to shoot them with missiles. If they slither out of the walls completely, run away from them to avoid getting chomped and shoot them from afar when they snake into the air, ready to strike. An alternate attack is to hit them with the Charge Beam while they’re out of the walls, then rush them and finish them off with a Lethal Strike.

If you cannot get the slimy beasts with a Lethal Strike, finish them off with missiles. The tunnel worms are more vulnerable to missiles while they execute their vortex breath attack. Stand as far away from the vortex as you can and unload as many missiles as you can. Crush both tunnel worms. Then the small square hatch in the corner of the room opens up. Drop into Morph Ball mode and roll in." 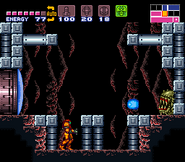 A Fune in Super Metroid.

Sector 3 of the BSL Station.

A Fune firing electric projectiles at Samus in Other M

Samus returning fire at the Fune.

The Fune spitting Samus out.

Samus using a Lethal Strike on the Fune.