Samus Aran’s Fusion Suit is the result of radical alterations to her Power Suit during the opening scenes of Metroid Fusion. Its creation was an unexpected side effect of the surgical removal of certain parts of her armor and the Vaccine "Metroid" given to Samus when she was about to die from an X Parasite infection.

When Samus was attacked and incapacitated by the then-unknown X Parasites, the doctors treating her were unable to take off her Power Suit while she was unconscious. The organic parts of the suit had physically bonded with her, and the majority of it had to be surgically removed. However, this was not enough to save Samus, and she seemed close to death until the Federation administered Vaccine "Metroid", created from Metroid DNA. This destroyed the X within her but altered her cellular makeup; however, the operation did not visibly alter her normal appearance. Taking advantage of what was left of her original Power Suit, Samus immediately set out in her new 'Fusion Suit' to investigate X activity on a space station in orbit around SR388.

As is tradition with the structure of Samus' suits, the Fusion Suit is bulky enough to obscure most details of her figure, even when in such a stripped-down state. The Fusion Suit has small Blades on Samus's free arm reminiscent of Metroid "teeth" or the hooks on the arms of the Chozo; it also has three small purple spheres on the back that are similar to a Metroid's internal nuclei. This is also a feature on the Dark Suit, although in this case they resemble the eyes of the Amorbis. The helmet gains a Metroid-like appearance, with the sides looking like a standard Metroid's outer talons (or inner talons, if one considers their arrangement). The visor is also altered, possessing a point in the top-center area, possibly, mimicking the three nuclei inside a Metroid. Less sturdy and possessing weaker shielding than the Power Suit, the Fusion Suit takes heavier damage from enemy attacks and is initially unable to protect Samus from extreme cold, to which the Metroid vaccine has left her vulnerable. Another of the suit's weaknesses is the inability to use the Ice Beam, forcing Samus instead to rely on Ice Missiles, a technology she had not used since her final struggle against Dark Samus.

The Fusion Suit does have advantages, however. Working in conjunction with Samus’s new part-Metroid physiology, the suit allows her to safely absorb free-floating X to replenish both health and ammunition, mirroring the energy absorption abilities of Metroids. The lighter construction allows Samus to grab ledges and hold on or pull herself up, something she was previously unable to accomplish in her suit without the Power Grip upgrade or the aid of magnetic Grab Ledges. Instead of adding hardware, the Fusion Suit can use specially prepared data to mimic her previous upgrades and abilities. Eventually, Samus restores the functionality of her old Varia and Gravity Suits; these upgrades are signified not by the familiar changes in physical dimensions, but rather by changes in the Fusion Suit’s color scheme. However, the suit's left hand remains blue when seen from behind the Arm Cannon.

During the climactic final battle against an Omega Metroid, Samus absorbs the Core-X from a fallen SA-X, restoring her DNA to its pre-vaccine state and causing the color scheme of the Fusion Suit to change one last time, now resembling her Varia Suit prior to its deconstruction. This new suit upgrade also grants Samus the use of the Ice Beam, returning her to the height of her power, allowing her to defeat the Omega Metroid and escape the doomed station. It is unknown whether Samus will be featured wearing the orange Fusion Suit in her next appearance, or if it is possible that she will restore her Chozo Power Suit as she has done in previous games.

"The standard suit Samus possesses at the beginning of the game."

"Fusion Suit status: incomplete
When surgeons were forced to remove parts of Samus's Suit, they also took away most of its special abilities. Samus regains abilities by downloading information from the research station's Data Rooms and by defeating the Core-X creatures that patrol the station's halls."

T3 (Unlock Fusion Suit)
"It's possible to unlock the Fusion Suit from Metroid Fusion for Samus to wear in Metroid Prime. Once you've completed Metroid Prime, simply connect the two games using the Nintendo GameCube Game Boy Advance Cable. The Fusion Suit changes the appearance of Samus, but her abilities stay the same."

"During exploration of SR388, Samus is infected by an X parasite and nearly dies. A vaccine created from Metroid cells saves her, but her suit turns blue and loses most of its abilities and weapons. This new Samus must regather her special abilities and fight to neutralize the threat of the X parasites in the space station run by Biologic Space Laboratories."

Outside of Metroid Fusion

When Metroid Fusion and Metroid Prime are connected with a Nintendo GameCube Game Boy Advance Cable after Metroid Prime has been completed at least once, players are granted the option of playing Prime with Samus wearing her Fusion Suit. The change is purely superficial and does not affect gameplay, much like the Justin Bailey suit in the original Metroid. It also does not extend to Samus’s helmet interior and arm cannon, though Samus' eyes change from an intense, angered manner to a more calmed one when wearing the suit (though this may be because her face was not properly rigged). When Samus acquires the Phazon Suit in this mode, it takes on the appearance of the final suit from Fusion, but with a blue visor instead of the actual green. In the New Play Control! and Metroid Prime Trilogy versions of Metroid Prime, the Fusion Suit is unlockable through the Bonus Credit system introduced in Metroid Prime 3: Corruption.

Metroid: Samus Returns features the Fusion Suit, once again as an unlockable palette swap after beating the game once, although it now makes the game more difficult by increasing damage from hazards and enemy attacks. After completing the game, and tapping the Metroid amiibo on the Nintendo 3DS, Fusion Mode will be unlocked. This incited some controversy with fans, who were critical of the choice to lock a harder difficulty mode behind amiibo. Nintendo later clarified that a separate Hard Mode is included in the game, unlockable after completing it once.[1] [2] The Fusion Suit has larger shoulders than its previous incarnation, and the Varia Suit's colors are now a darker green and pink.

In Brawl, the Fusion Suit also appears as a Trophy and a Sticker.

In Ultimate, the Fusion Suit is also available as a Primary Spirit, using its original artwork from Fusion. It is Advanced class and Shield type, with the additional trait of powering up the fighter's shooting items. Unlike most Spirits, the Fusion Suit can only be unlocked through summoning: sending the Chozo Statue and Metroid Spirits to the real world will leave behind their cores, which can then be combined to summon the Fusion Suit. This references the fact that the Fusion Suit was created from a mixture of Chozo technology and Metroid DNA.

The Fusion Suit color scheme as it appears in Super Smash Bros Brawl. 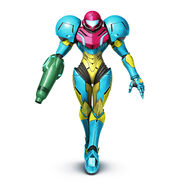 Super Smash Bros. for Nintendo 3DS and Wii U.

Super Smash Bros. Ultimate
Add a photo to this gallery

In Nintendo Land, while playing multiplayer in Metroid Blast, the second Samus Mii player wears a suit that is colored similarly to the Fusion Suit alternate costume from the Super Smash Bros. series. With the Samus costumes in Nintendo Land being modeled after her appearance in Metroid: Other M, this is the debut of the Other M-style Fusion Suit later seen in Super Smash Bros. for Nintendo 3DS and Wii U. This costume was also seen in the E3 2011 Battle Mii demo.

Retrieved from "https://metroid.fandom.com/wiki/Fusion_Suit?oldid=265687"
Community content is available under CC-BY-SA unless otherwise noted.