First area explored in the game

The G.F.S. Olympus is a Galactic Federation Olympus-class battleship that appears in Metroid Prime 3: Corruption. It is the first area Samus Aran explores in the game.

The Olympus is home to three main varieties of crew members, including Federation Troopers, and tech specialists, as well as engineers. The docking bay Samus lands in has a small area for using the Training Drones, which are used by the soldiers aboard for training and entertainment. At the time of Metroid Prime 3, the G.F.S. Olympus is 18 years old and is stated as being the first ship of its size to receive an Aurora Unit: Aurora Unit 242. It is a female personality whose integration into the Olympus systems means the ship needs less crew than other kinds of ships of similar size, leaving more space over to weapons systems.

The Olympus is under the command of Fleet Admiral Castor Dane, and is often stationed around Norion.

The Olympus serves as the meeting point for the four Bounty Hunters hired by the Galactic Federation in Metroid Prime 3: Corruption. Rundas, Ghor, Gandrayda and Samus Aran board the ship whilst it orbits planet Norion in the Kalandor region. The Hunters are invited to the Ready Room, where they are briefed on their assignments by the captain, Admiral Dane. Dane and a holographic representation of the Aurora Unit 242 explain to the Hunters that a missing Olympus-class ship, the G.F.S. Valhalla, has been attacked by the Space Pirates four months ago, and the ship's Aurora Unit, 313, was stolen in the raid. 242 says that all the Aurora Units in the Federation Solar System have been infected by a strange Corruption Virus. AU 242 also contracted the virus, but the scientists of the Federation were able to develop a vaccine and administer it to 242. Dane requests that the Hunters give the vaccine to the other Aurora Units in the system, and investigate Space Pirate activity in the area to find out what they plan to do with the stolen Aurora Unit. At this point, the Olympus is attacked by Space Pirates. The Olympus successfully repels the Pirates, with help from the Hunters. However, Norion is also under attack, so the Hunters make their way out of the ship. Samus battles one of the Pirate's Berserker Lords on the way to her Gunship. The Hunters then descend to the planet to fight off the Pirates. The planet is also under threat of a large Phazon meteor that the Pirates brought through a Wormhole to impact the planet. The Hunters are about to activate the planet's defence cannon, but are attacked by the resurgent Dark Samus, who knocks them all out cold with a strike of Phazon energy. Samus is able to activate the cannon to destroy the incoming meteor before she falls into a coma.

One month after to the assault on Norion, Samus wakes up on the Olympus, where a Lab Assistant tells her that Dark Samus infected her and the other Hunters with Phazon, and their bodies are self-generating the substance. The Federation equips Samus with a PED Suit to channel the Phazon through her weaponry. Finishing the PED Suit test, Aurora Unit 242 requests Samus to come to her chamber, discussing the Phazon Corruption and her next mission. Finishing the discussion, Samus immediately heads to her Gunship and flies off. However, the Olympus is moving to a rendezvous point, and therefore, Samus can no longer dock at this station for the remainder of the game.

During the events on the Pirate Homeworld, 242 states that the Olympus scheduled a full scale assault on the entire planet, in hopes to rid of its Leviathan, though a planetary shielding must be disabled first. Destroying the generator, the attack begins. Admiral Dane calls forth Samus at a said area to meet with her. The Olympus flies down to the surface, as a few Demolition Troopers exit the vehicle.

After Samus acquires the command codes for the Leviathan orbiting the Pirate Homeworld, The Olympus takes control of it and uses it to create a wormhole to Phaaze. The Olympus then leads the assault on the Space Pirate force above the planet while Samus lands on Phaaze and searches for Dark Samus. Prior to her nemesis' extinction and self-destruction of Phaaze, Admiral Dane demands a full retreat. The remaining fleet escapes, with 37% of it destroyed and more than 50% with heavy casualties, but no Samus. Concluding, Samus's Gunship flies into view and the hunter herself types Mission Complete on the Olympus boardscreen.

"G.F.S. Olympus - GF DF BB063
The first of its class, the G.F.S. Olympus was launched 18 years ago from the Federation Shipyards at Aliehs III. Aurora Unit 242 has been on board since launch, the first AU to serve aboard a capital ship. Olympus is the flagship of the Seventh Fleet. The home port is planet Norion. Admiral Castor Dane has commanded the vessel for the last 5 years."

In Greek mythology, Mount Olympus was regarded as the "home of the gods", specifically of the Twelve Olympians, the twelve principal gods of the ancient Hellenistic world. Any climb to Mount Olympus starts from the town of Litochoro, which took the name City of Gods because of its location on the roots of the mountain. Mount Olympus was the most worshiped mountain of Greece. Olympus was surrounded by Uranus, the heaven. It never rained on Mount Olympus nor was it ever windy, only some clouds appeared from time to time to bless the world with water. Mount Olymp is a popular mountain name. Apart from the Greek Olympus, there was a mountain of the same name in ancient Phrygia and also currently one in Cyprus, one in Utah, one in Washington, one in San Francisco, CA, one on Mars, and many others. 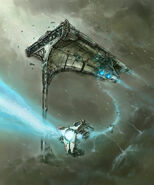 The main control panel for the ship

Samus makes her way back inside the ship through a hatch after being released in an air lock.

Samus awakens in MedLab Delta after the Norion incident.

The Olympus and a Stiletto-Class Fighter above Phaaze.
Русский
Community content is available under CC-BY-SA unless otherwise noted.
Advertisement