Cannot track fast targets
The GM-42 "Growler" Class Turret is a dated turret used by the Galactic Federation. Despite its age, it is still considered very effective as a point-defense system. They are lightly armored and are similar to Auto Defense Turrets from Metroid Prime. They can deal a fair amount of damage, though can be easily avoided by agile enemies. A single Missile or a Charge Beam shot from any beam polarity will destroy the turret. Samus Aran encounters these turrets in the hallways of the GF base in the Temple Grounds of planet Aether. Space Pirates were able to steal the designs for the turret and created an advanced version, known as the Humility Class Turret.

In Metroid Prime 3: Corruption they are replaced by the Halberd-Class Turret.

The GM-42 'Growler' Class Turret is a dated design, though still quite effective as a point-defense system. It is lightly armored, and fast-moving targets can evade its tracking system. Several copies of the system exist, including the Space Pirate "Humility" Class automated turret.

A growler is an electrical device used for testing insulation of a motor for shorted coils. It is considered by many to be one of the most versatile tools for electric motor service.

It may also refer to one of four United States Navy ships that were in commission between 1812 and 1964.

Its designation, GM-42, may be a reference to the MG-42, a German WWII machine gun. 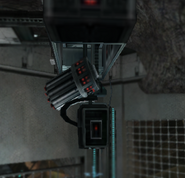 Add a photo to this gallery
Retrieved from "https://metroid.fandom.com/wiki/GM-42_‘Growler’_Class_Turret?oldid=279497"
Community content is available under CC-BY-SA unless otherwise noted.