The Galactic Federation was formed in the year 2000 (2003 in Metroid: Zero Mission) of the Cosmic Calendar when representatives and delegates from many civilized worlds coalesced and established the intergalactic Congress known as the The Galactic Federation. A golden age of peace and prosperity followed, and trade prospered with thousands of ships ferrying goods between planets across the galaxy.

Later, Space Pirates appeared and commenced raids on the spaceships. To combat this new threat, the Federation Bureau founded the Galactic Federation Police - an elite force which made valiant efforts against the Space Pirates. However, the Space Pirates proved too difficult to catch in the vastness of space. In response to these difficulties, the Federation Police called on the galaxy's best warriors to track down and battle the Pirates with the offer of great rewards for captured Pirates. These warriors were called "Space Hunters", and they served as intergalactic bounty hunters - the most famous and powerful of which is Samus Aran. Samus is hired by the Galactic Federation for many missions, including foiling the Space Pirates' plot to breed the Metroids as bioweapons.

The Federation later retains Samus's services for another mission during Metroid Dread. The game introduces the Extraplanetary Multiform Mobile Identifiers (E.M.M.I.), robots built by the Federation for research applications with DNA-extracting features. These E.M.M.I. are dispatched to investigate a possible sighting of X Parasites on ZDR, but vanish. Before landing on ZDR, ADAM remarks that the bounty for the mission seems insufficient considering the danger of the mission. When Samus comes into contact with them, they begin to hunt her down. It later transpires that Raven Beak hacked the E.M.M.I. to target Samus in order to extract her Metroid DNA. She ultimately destroys all seven E.M.M.I.

Since it was developed as story background, most of the actual Federation remains a mystery. Its structure, processes, rules, policies, legislation and so on are largely unknown and, since politics play little to no role in Metroid games, are likely to remain so. It is known that a large number of planets and sectors remain unexplored, and the Federation is concerned with these. To that end, it frequently sends scientific exploration teams to these sectors. The racial breakdown of the Federation is similarly unknown; the only Federation politicians ever shown have been aliens, but humans comprise the vast majority of the Federation Marines, to the point that the Federation appears almost synonymous with humanity. The specifics of culture, religion, trade, currency, technology, civil rights/liberties, and so on are also unknown. Sectors are ruled by governors. The Magazine Z manga revealed that the capital planet of the Federation is Daiban, though it has been speculated by some fans to be Earth because the latter planet was described as such in the instruction manual of the NES Metroid. If this is the case, Daiban's position as capital planet is questionable.

With the release of Metroid Prime 3: Corruption, some of the mystery of the Galactic Federation was pulled back. It is known that they use Aurora Units as a vast network of information for military, business and other governmental purposes. A reference to an "old man" who is preparing the Federation fleet for invasion of the Pirate Homeworld is also mentioned by several Fleet Troopers on the G.F.S. Olympus. This person may or may not be the Chairman of the Federation, or at least the head of the military. It is implied by context to be Admiral Dane. The story of the Federation's creation is depicted in a story with Chairman Keaton in the Magazine Z manga.

Despite this, not all things are well with their governing system, as there is evidence of sentient races throughout the galaxy being, for their own reasons, resentful of the Federation (as depicted in the manga). It is also known that the organization has had one unsuccessful rebellion in the past.

Although early in the series the Galactic Federation is portrayed as a wholly altruistic organization, later games cast it in a considerably darker role.

In the Metroid Magazine Z manga a Space Pirate prisoner designated P-1 claims that the Federation discriminates against species it considers "primitive", such as the "Simians", or races it considers responsible for previous conflicts, such as the "Elfin". Although P-1's testimony is of dubious accuracy, it should be noted that his stories seem to resonate with the experiences of members of both species.

In Metroid Prime: Hunters it is revealed that the Federation had developed prototypes of items mimicking Samus' Power Suit and Morph Ball, as well as an illegal weapons system known as the Shock Coil. Sylux later stole these items from their place of construction, presumably killing the scientists and soldiers there. Fans have speculated that Sylux could have been one of these scientists, and that the Federation could have betrayed or mistreated Sylux in some way; it apparently had no difficulty wielding the suit and weaponry soon after acquiring them. Another theory is that Sylux simply became aware of the items and sought to acquire their power for itself. In either case, it is safe to assume that Sylux believed them too dangerous to be kept in Federation hands.

Conversations between fleet troopers in Metroid Prime 3: Corruption hint that at least one group had rebelled against the Federation in the past and was subsequently dispatched through military force, though there is no direct evidence of this. In the same game, two Space Pirate Data logs (Taking Valhalla and Bryyo Falls) reveal that factions within the Federation are secretly bribed by the Pirates, or are working as spies answering directly to the marauding race. How these infiltrations occurred is unknown.

During M17: Infestation in Metroid Prime: Federation Force, General Alex Miles sends the Federation Force to a weapon factory on Talvania, where Metroids have been discovered. The Force is tasked with setting the facility to self-destruct, and to retrieve a Metroid Egg for study. While Miles' motivations are suspicious, the general does not explain his order and it is entirely possible he had peaceful intentions. Retrieving a Metroid Egg(s) is a bonus objective, but considered to be canon as doing so unlocks a secret ending, in which Sylux boards a research station and causes the egg to hatch.

Metroid: Other M reveals the existence of a massive conspiracy within the Federation military to create a special-forces unit consisting of captured bioforms from different planets, (though most of them are in fact Zebes wildlife), Metroids, cybernetically-enhanced Zebesians, and a Mother Brain duplicate codenamed MB (to control Metroids) on board a derelict space colony known as the BOTTLE SHIP: while the true scope of this conspiracy is unknown, the extraordinary amount of resources apparently invested in restoring the BOTTLE SHIP indicates that the plotters must have been well-connected within the Federation government. It was stated that the scientists intentionally tried to use the clones as bioweapons, which is strictly forbidden under federation law.

When MB turned the station's bioweapons against their creators, the conspirators, whom Samus dubbed the ringleaders, sent an assassin known as "the Deleter" to eliminate all witnesses and destroy the facility, disguised as a member of the unwitting Galactic Federation 07th Platoon. However, Samus Aran was able to obstruct the Deleter's mission and escape with two other witnesses (Madeline Bergman and Anthony Higgs) before destroying the BOTTLE SHIP and its research facilities. It would appear that the Chairman of the Federation was actively involved in investigating the conspiracy, having dispatched the 07th Platoon to the ship and specifically instructing them to search for survivors and witnesses.

Interestingly, before its annihilation, the BOTTLE SHIP began traveling to the capital of the Federation: although Samus assumes that this is a spontaneous decision by MB to attack the Federation, it is also possible that the original conspirators had planned from the start to use the BOTTLE SHIP and its bioweapons as part of some form of coup.

Much later, Samus discovered the existence of a research-and-development program very similar to the BOTTLE SHIP's on-board another research station, the Biologic Space Laboratories research station, during the events of Metroid Fusion. However, this program seemed to be focused primarily on reviving and breeding Metroids, and was apparently being carried out with some measure of legality. Though Adam states that the Metroid program was for peaceful purposes only and begs for Samus to try to understand; whether this is true or not remains to be seen. A number of BOTTLE SHIP bioweapons including Nightmare, Ridley's clone, and Zebesians were also held on board the station, although it was unknown whether they were part of a continuation of the bioweapons program or merely being kept for legitimate scientific study. Again, the true extent of the conspiracy is never revealed, nor whether it was at all connected to those responsible for the BOTTLE SHIP.

Later, the Federation took heavy interest of the X Parasites on board seeing their "limitless" potential, possibly using them as bioweapons or some other purpose. Samus heavily objected, knowing how extremely dangerous the parasites are, and how they could have brought about the end of the entire universe. Thus, it led her to destroy the BSL before the Federation could board and invade to only get annihilated by the X. The fact the Federation even considered capturing the X is unnerving to say the least. Samus worried that she may now be considered a fugitive for destroying valuable scientific research and specimens. In the end, Adam believed that someone would understand why Samus disobeyed her orders. It is possible that the "Federation official" that contacts Adam was leading the conspiracy on the BSL, part of a rogue faction within the Federation that created the program.

The Japanese version of Metroid Fusion directly indicates the whole conspiracy on the B.S.L., namely the creation of Nightmare, the resurrection of Metroids, and the attempt to capture the X Parasites, were all the work of rogue Federation officials. The English version's localization however omits this, implying that a large portion of the Federation backed the conspiracy, which led to some confusion on why Metroid Dread had Samus working with the Federation again.[1]

The credentials for the members of the 07th Platoon in Metroid: Other M mention several Federation locations. Each soldier has a record of time in one of several Training Bases (Anthony at #1, Maurice at #2, Lyle at #3, K.G. at #4 and James at #6). Anthony has a background at the third division of the Federation Department of Special Affairs, Lyle worked at the Special Ops Training Center, Maurice was part of the fourth Resupply Center at the Department of Logistics, James was an agent in Intelligence Group 2 of the Federation Central Information Agency (which may be similar to the CIA), and K.G. did time in Section 2 of the Combat Technology Research Center.

Federation ship seen in the manga. 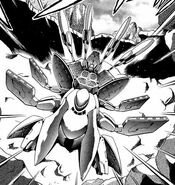 Another GF ship, in attack mode.