The separate Galactic Federation Army is seen in Metroid: Other M and alluded to in other Metroid games.

Normal Trooper- The most basic unit of the GFMC, They use basic power-beam weapons and are the main fighting force for the GFMC.

Missile Trooper- A marine that wields a rocket-launcher type weapon, an Ing-possessed Missile Trooper was also fought in Metroid Prime 2: Echoes for a Missile Expansion.

Demolition Trooper- Marines that specialize in explosives. They carry a Det Pack on their backs and have a yellow shot from their guns. They have the weakest armor and in Metroid Prime 3: Corruption, they helped Samus blow through some obstacles.

PED Trooper- When the Marines began experimenting with Phazon they developed a new kind of soldier with enhanced weaponry and armor. They are extremely powerful and are invincible for a short period of time when they activate their PEDs. Upon the destruction of Phaaze, these soldiers were presumably decommissioned (as Phazon no longer existed without Phaaze). 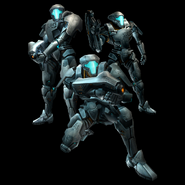 Concept art of the GFMC in Echoes.
Community content is available under CC-BY-SA unless otherwise noted.
Advertisement