The Game Boy Player (ゲームボーイプレーヤー, Gēmu Bōi Purēyā?) (DOL-017) is a device made by Nintendo for the Nintendo GameCube which enables Game Boy, Game Boy Color or Game Boy Advance cartridges to be played on a television. It uses physical hardware nearly identical to that of a Game Boy Advance, and connects via the high speed parallel port at the bottom of the GameCube that acts as a base with a frontal slot for inserting game cartridges.

The Game Boy Player requires use of the Game Boy Player Start-Up Disc to access the hardware. Several GBA games gain a rumble feature when played this way. The device also supports the ability to use a Nintendo GameCube Game Boy Advance Cable to use a GBA or GBA SP for a controller, as well as a link slot on the hardware for games that use it.

The hardware is about an inch thick and otherwise the same dimensions as the GCN and is available in Indigo, Black, Spice, or Platinum colors in Japan; Black in North America and Europe, and Black and Indigo in Australia.

The menu has six options to choose from: 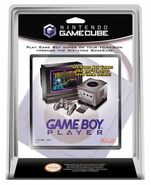 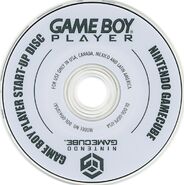 Game Boy Player Start-Up Disc
Add a photo to this gallery
Retrieved from "https://metroid.fandom.com/wiki/Game_Boy_Player?oldid=204379"
Community content is available under CC-BY-SA unless otherwise noted.