Stage 5: Pupa
The Gamma Metroid is the fifth stage of a natural Metroid's life cycle. They appear as an enemy in Metroid II: Return of Samus, its remake Metroid: Samus Returns, and as a cameo in Metroid Fusion.

The Gamma stage is an extension of the previous Alpha Metroid's physical structure. Along with an increase in size, durability and strength, the Metroid's electrical powers have greatly expanded. Eventually, the organism will shed its entire body to become a Zeta Metroid; the Gamma Metroid can thus be viewed as a mobile pupa with a developing young adult within.

In Metroid II: Return of Samus, Samus Aran encountered sixteen Gamma Metroids during her mission to SR388, while in Metroid: Samus Returns there are only fourteen of them.

Whereas the previous form had underdeveloped, barb-like legs along its sides, the Gamma Metroid's have now grown into fully functional insect-like limbs which allow it to walk along the ground, climb ledges and jump. Despite this, the creature still spends much of its time floating in the air using electricity. The pair of red compound eyes have multiplied into two groups of three and the exoskeleton has expanded and thickened, giving additional protection to its membrane and nucleus underneath it. The Metroid's three large fangs surrounding its lamprey-like mouth have grown larger as well, and a small appendage resembling a tail can be seen on the rear end of the organism.

The Gamma Metroids' physiology differed slightly in the original Metroid II and Metroid Fusion. The three massive fangs initially consisted of a horn and two tusks. The Metroid's head featured no oral cavity whatsoever, and their six compound eyes were blue instead of red.

Like most Metroids in Samus Returns, some Gammas are classified as "evolved". These evolved forms are visually characterized by their distinctive orange pigmentation and green moss or fur-like texture on their backs. Their electrical attacks are much stronger and glow with an orange light that gives them a flame-like aestethic.

Gammas do not appear to be hindered when submerged under water or lava, and some have made their nests in superheated areas.

In Metroid II: Return of Samus, the Gamma Metroid is capable of launching small arcs of static electricity from its head. This lightning attack can deflect Missiles as well as deal damage to Samus. Despite having legs, the creatures never walk along on the ground and instead perpetually float in the air attempting to ram Samus. Gamma Metroids can withstand ten direct missiles.

In Metroid: Samus Returns, Gamma Metroids have additional attacks, such as shooting a long-range beam of electricity from their mouths, releasing a damaging pulse around them, and conducting electricity along the entire floor on which they stand. They also occasionally drop electric projectiles from their membranes as they fly around. Their melee attacks consist of a swooping dive attack from the air and a lunging bite when on the ground. If Samus successfully parries these attacks with a Melee Counter when they are not covered with electricity, she will mount the Gamma Metroid, pull its upper fang and fire Beams or Missiles into its exposed mouth (in a manner reminiscent of an Overblast) until she is shaken off.

The durability of Gamma Metroids are increased in the remake as well, as they require 20 missiles to kill and their shell is no longer a hitbox, causing missiles to harmlessly bounce off. However, they can now be damaged by the Ice Beam or the Beam Burst when the Metroids are shot either in their faces or membranes. Shooting a charged Ice Beam shot at the membrane while a Gamma Metroid is levitating will encase the underside in ice and not only cause the organism to fall to the ground but also hinder its walking speed, unlike the Alpha Metroid who remains airborne. It will then try to bite Samus, which can easily be Melee Countered as the mouth is not protected with electricity. A charged Ice Beam shot deals more damage if it intercepts an electrical sphere before reaching the Metroid, and can further increase in power the more projectiles are found in the trajectory of Samus' attack.

Like most stages in the species' life cycle, the Gamma Metroid secretes a resin-like substance onto its environment, which hardens and shapes into bio-organic structures. Unique to this specific form however, is the creature's ability to shape the substances into a mass of entangled webs; they serve as hatches leading to unseen passageways that connect to nearby rooms. The webbed-doorways will only open and close at the touch of a Metroid and are thus inaccessible by Samus, allowing the creature to quickly escape into these when she has inflicted a certain amount of damage to it. Unable to give direct chase, she is forced to find the room it has fled to via other means.

Gamma Metroids emerge from a Metroid Husk of their previous stage, though this event is not shown as Samus finds a shed husk shortly before she encounters her first Gamma Metroid.

"After molting from the lesser mutation, the Metroids will grow much larger, gaining the power to attack with lightning bolts."

Metroids (p. 16)
Gamma Metroid
"As a Metroid continues to grow after its first molting, it gains the ability to attack with bolts of lightning."

"These creatures are much larger than the Alphas and they attack intruders with stinging lightning bolts. Hit them quickly."

Gamma Metroid (p. 21)
"This is where the fight truly begins. Gamma Metroids don’t pick up any speed from the smaller, weaker Alpha phase, but they pack a massive punch. In fact, expect to be defeated again and again and again, until the Gamma beats its attack patterns into your head. It has more moves than Metroid larvae and Alpha Metroids combined, and each of them feels like getting hit by a world-class boxer. Play it safe when you see one of these mean monsters, and focus on landing attacks on its core with the Ice Beam and missiles. Once you learn its patterns, you stand a chance. Before that, it’s a fight from the ropes."

Artwork of a Gamma Metroid from Metroid II: Return of Samus

A Gamma Metroid sprite from Metroid II: Return of Samus

Gamma Metroid in the upper left tube in the Restricted Laboratory in Metroid Fusion.

Close-up of the Gamma Metroid's electrified mandibles in Samus Returns

An "evolved" Gamma Metroid about to escape

Samus mounting a Gamma Metroid and shooting it

Samus mounting an "evolved" Gamma Metroid and shooting it 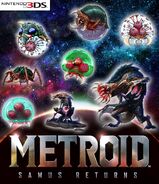 Metroid life cycle
Add a photo to this gallery
Retrieved from "https://metroid.fandom.com/wiki/Gamma_Metroid?oldid=263013"
Community content is available under CC-BY-SA unless otherwise noted.