Wikitroid
Register
Don't have an account?
Sign In
Advertisement
in: Featured articles, Articles with non-canonical information, Characters,
and 14 more
English

Defeated by Samus Aran at the Pirate Homeworld, due to Phazon corruption.

Various electricity-based weapons, able to morph into a wide variety of forms.

Gandrayda is a Bounty Hunter who appears in Metroid Prime 3: Corruption.

Gandrayda was a Bounty Hunter of unknown origin. However, she possessed metamorphic abilities similar to the biomorphs of Jovia XII. She could assume the form and abilities of most living things, including creatures and even machines differing significantly in size. Her base form is humanoid in shape with translucent, purple skin. Her age was unknown, though a psychological evaluation, her predilection for pranks, and her informal speech patterns in even military settings all indicate that she was relatively young. She viewed Bounty Hunting as a very enjoyable sport and considered the veteran hunter Samus Aran her chief rival. She intended to surpass Samus as a veteran Bounty Hunter as soon as possible. Gandrayda was a very capable combatant, but was often hired for stealth and reconnaissance missions due to her ability to mimic creatures. Lore on the Pirate Homeworld referring to her as "Mistress Gandrayda" suggests that she became a Space Pirate—it is likely that she fell under the influence of Dark Samus after being corrupted by Phazon.[1]

Along with Ghor, Rundas, and Samus Aran, Gandrayda was asked by Fleet Admiral Dane of the Galactic Federation to help stop the Phazon corruption of the Aurora Units. Once the Space Pirates attacked the G.F.S. Olympus, the GF ship they were currently aboard, Gandrayda helped defend the ship by confronting the infiltrating Space Pirates. Gandrayda can be seen leaping and kicking a Pirate Militia and then finishing it off with one of her throwing blades in the Repair Bay Shaft before the blast doors close; she is gone by the time they reopen.

She then went to Norion to help the Federation ground troopers and protect the base from the invasion. When Samus arrived at Norion's Generator C, she found a group of Space Pirates waiting for her. Just as she was about to fight them, one of them turned on its comrades and massacred them before revealing itself to be a disguised Gandrayda, who left "Sammy" behind to do the work of activating the generator, claiming that machines were not her field of expertise.

Once the four Bounty Hunters reached the Control Tower to activate the cannon that would destroy the approaching Leviathan, Dark Samus intervened and attacked them. Gandrayda and the two male bounty hunters were initially knocked down, but then rallied behind Samus. However, Dark Samus then unleashed a burst of Phazon that struck all of them at once, rendering them unconscious.

Two weeks later, Gandrayda awakened to discover that Dark Samus's Phazon blast had caused her body to begin producing Phazon. With no visible negative effects, the Federation outfitted her with a Phazon Enhancement Device in order to harness this new source of Phazon. Gandrayda was sent to find the Space Pirate's stronghold, but the Federation eventually lost contact with her. Unknown to the organization, Gandrayda had been corrupted by her internal Phazon a week after she left.

After another week, Samus Aran awoke, and some time later the Federation found the location of the Pirate Homeworld thanks to an emergency GF communication capsule from Gandrayda, but didn't know her current status; it is safe to assume this transmission pod was used by Gandrayda prior to her corruption. Samus infiltrated the planet and eventually received a transmission from a nearby Federation Marine designated NZG41. She managed to reach the Marine and helped him activate an elevator. She and the Marine went up the elevator, though once they reached the Proving Grounds the Marine suddenly began firing at Samus, who dodged the shots in her Morph Ball form. The trooper transformed into Gandrayda, who was now clearly heavily corrupted and eager to battle Samus.

During the fight, Gandrayda will jump, flip, and run about the room, making it difficult to shoot her. She can create throwing blades that will lock onto and "seek" Samus, though they can be shot down for power-ups. Gandrayda will also use a ground-based impact wave that streaks directly towards Samus. If successfully shot with a fully Charged Beam, she will trip onto the ground, leaving her vulnerable for approximately 2 seconds.

After taking some damage, Gandrayda will begin to use her shape-shifting abilities to transform into different enemies. She'll revert to normal after taking enough damage in these forms or after a certain amount of time. She also shares the weak points of these forms, so Samus can damage her in the same way as she did those enemies. The following is a list of the forms Gandrayda will take at this time:

At 75% health, Gandrayda opens part of the roof, covering the outer portion of the battlefield in deadly Acid Rain, as well as lower the six structures around the room. She'll then continue her attack, and will also begin using new transformations.

When Gandrayda's health drops to 50%, she will re-raise the six aforementioned structures before mimicking Samus in her iconic Varia Suit. While in this form, she will use a variant of the Boost Ball to bounce around the area and then unmorph to fire a powerful Beam.

At 25% health, Gandrayda stops transforming and begins to use Hypermode, where she moves even faster and all weapons used against her outside of Samus' own Hypermode attacks cause insignificant damage. When her Hypermode wears off, Gandrayda turns invisible. Samus must use the X-Ray Visor to keep track of Gandrayda and attack her until she uses Hypermode again.

At any point during the battle, Gandrayda may leap towards Samus in an attempt to grab her. If Gandrayda is successful in grabbing Samus, the prompt "Shake Off Gandrayda" will appear on the Heads-Up Display, and Gandrayda must be shaken off with the Wii Remote and Nunchuk. Gandrayda has four different attacks which vary depending on the direction Gandrayda grabs Samus from. Gandrayda's core ability, the Grapple Voltage, continually drains Samus of energy, with her physical attacks (such as punches and slaps) doing additional damage with every successful strike or blow. Gandrayda's attacks deal 63 Energy Points of damage, regardless of how Samus is grabbed. A description of these four attacks can be found below. A demonstration of all four attacks can be viewed here.

If Samus is able to successfully shake Gandrayda off, she will leap off and stagger wherever she lands. This leaves her open to a Charge Beam shot which can knock her down, or a Screw Attack. If Samus fails to shake off Gandrayda, she will leap back without staggering and resume her normal actions providing no window.

Once defeated, Gandrayda screamed in agony as she began rapidly cycling through different forms (a Pirate Trooper, Rundas, Ghor, a Berserker Knight, and finally Samus in her current PED Suit) as she reached out to Samus, who saw the wraith-like figure of Dark Samus approaching. After witnessing the fates of Rundas and Ghor, Samus knew there was nothing she could do to save Gandrayda, and instead looked away and clenched her fist as Dark Samus absorbed Gandrayda.

Gandrayda made one final appearance in the Special Ending of the game, in which Samus takes a moment to mourn her fallen comrades on planet Elysia.

Gandrayda possessed powerful shape-shifting abilities that allowed her to assume the forms of various creatures as well as copy their abilities and powers. There seemed to be no limit to her shape-shifting powers, as she was able to assume the form of creatures significantly larger than herself such as Beserker Knights and Ghor, as well as transform herself into machines (and multiple entities) such as Swarmbots. She was also shown to be exceptionally agile, able to make high and graceful jumps, flips, and cartwheels in the air. Gandrayda also appeared to have some power over electricity: When not using her shape-shifting powers, she could attack from a distance by creating and throwing electric orbs or electric blades that home in on opponents. In addition, her power seemed to affect machines, as she was able to control the mechanism of the roof and structures during Samus's fight with her. She could also turn invisible to elude opponents.

Subject homeworld unknown. Possesses metamorphic ability similar to the biomorphs of Jovia XII. Can assume the form and abilities of most living things, including bioforms considerably larger than the subject. Scans are unable to determine subject’s age, but psych eval suggests a high degree of youthfulness. Intel suggests that bounty hunting is akin to a sport for her, one she enjoys considerably. Subject perceives the veteran Hunter Samus Aran as her chief rival, a rival she intends to surpass as soon as possible. 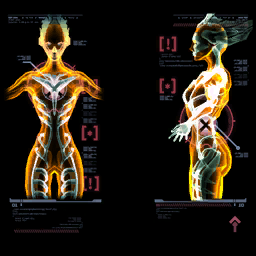 Gandrayda possesses the metamorphic ability to assume the form and abilities of other creatures. This talent has led many to seek her out for stealth and reconnaissance missions, despite her powerful combat abilities. Details on the subject's origins and age are unknown, but her unique traits have made her a sought-after Hunter for missions.

Mistress Gandrayda is the last of our leader's field commanders. We hope that she will succeed where the others have not. We hope that she will slay the wretched Hunter!
Gandrayda tests our mettle often. She moves among us in our form, watching us, looking for signs of weakness. Several unfaithful disciples have been ended...violently. Those who survive will be stronger, ready for the Hunter that comes for them from the void. Gandrayda has vowed to present Aran's bloody helmet to Dark Samus as tribute. We hope she fulfills that vow! 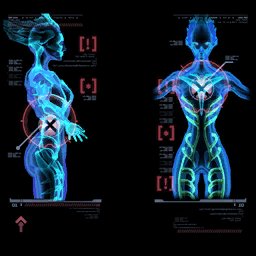 Gandrayda's ability to shape-shift has been greatly enhanced by Phazon exposure, allowing her to assume a number of deadly forms at will. These new forms come with a cost, as she also inherits their weaknesses. A mistress of stealth, she will employ her personal cloaking field often, setting up her next deadly attack. An advanced visor system may be able to detect her location.

Gandrayda appears as a Novice class Support Spirit, who can be equipped alongside a Primary Spirit with at least one available support slot. She provides the Electric Attack ↑ trait, referencing her use of electric attacks in Corruption.

Gandrayda can be unlocked through the Spirit Board. She uses two Puppet Fighters who must both be defeated: Dark Samus (in her purple costume, which may be based on Gandrayda's color scheme) and Pikachu (in his blue party hat costume); both fighters use electric-type attacks, once again referencing Gandrayda's electric abilities. The Spirit Battle takes place on the Frigate Orpheon stage, referencing the Pirate Homeworld where she is fought in Corruption. As a Support Spirit, Gandrayda does not usually have an assigned type, but she is treated as an Attack type during this battle.

Gandrayda's last words before the fight

Samus is attacked physically by Gandrayda

Gandrayda in her Berserker Knight form

Ghor-G is stunned for a period of time

Gandrayda launches around the arena in her mock Boost Ball

Gandrayda imitates the real Samus in her standard Varia Suit 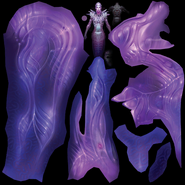