Wikitroid
Register
Don't have an account?
Sign In
Advertisement
in: Articles with non-canonical information, Species, Zebes,
and 6 more
English

Ramming
The Geega is a flying creature from the Brinstar region on Zebes that mostly spawns from Air Holes.

Their in-game sprites suggest they have a disproportionate body, as they have a relatively large head on a small body. The Geegas attack Samus by flying towards her with their large mouths open to harm her with their fangs. They are resistant to acid, as they can be seen rising out of pools filled with the substance in Metroid and its remake, Metroid: Zero Mission.

Like all other bioforms which emerge from Air Holes, it is assumed that Geegas have colonies built within the structures where they infinitely spawn from.

"They come out through air holes and fly sideways. There are two types and the brown ones have twice the strength."

"Flies out of the vents. As they are weak, it is easy to collect energy from them."

"It has horns with deadly poison, and charges at you with them. It often appears from vents."

"The Geega emerge from certain pipes in the complex. Usually, they're too quick to hit so it's best to memorise where they emerge and be ready to take evasive action."

Geega sprites exist in the data of Metroid Fusion. The sprites (presented below) show Geegas with an unusual purple color scheme, as well as bat-like wings, spikes on their backs and enlarged claws. These different traits were undoubtedly caused by the X Parasites' DNA manipulation in their attempt to make the Geegas more fearsome and possibly stronger (as is the case with most of the X's mimicries and victims). If added back into the game via modding, the Geegas can be seen burrowing out of the ground, rather than Air Holes, which do not appear in Fusion.[1] 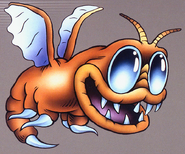 Previously unreleased artwork of a Geega from Metroid Mission Logs. 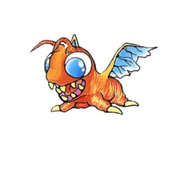 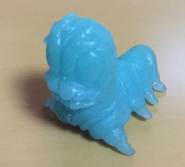 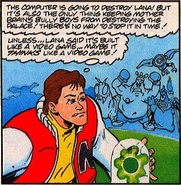 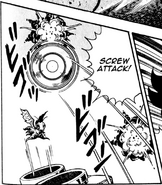