Unclear (likely human, based on name and physical appearance)

Unclear (due to text-only dialogue)

General Alex Miles (shortened as General Miles or Alex Miles) is a crucial character in Metroid Prime: Federation Force. Miles wears a specialized Galactic Federation Power Suit with yellow accents as opposed to the usual blue. Miles commands the Federation Force from aboard the G.F.S. Aegis, briefing them and providing intelligence as they conduct missions. Beyond this, General Miles' personality and appearance outside the suit is unclear. The character's gender is also unspecified.

In the briefing of M17: Infestation, Miles asks the Federation Force to collect Metroid Eggs for study. Miles's motivations for this request are suspicious, and may be foreshadowing the Galactic Federation's experimentation with Metroids in Metroid: Other M and Metroid Fusion. If an Egg is acquired, a secret ending will be unlocked that shows Sylux hatching the Egg in a Federation facility.

An early version of General Miles. 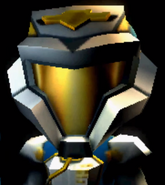 Miles during the credits montage.
Add a photo to this gallery
Retrieved from "https://metroid.fandom.com/wiki/General_Alex_Miles?oldid=261531"
Community content is available under CC-BY-SA unless otherwise noted.