Generator located on back, flashing module during stationary plasma attacks

Ghor's Armorsuit was a large, powerful suit of mechanical armor used by the Bounty Hunter Ghor in Metroid Prime 3: Corruption. When it was used, the armor enhanced Ghor's fighting strength exponentially but also altered his temperament, making him more aggressive and violent.

The Armorsuit was briefly encountered by Samus without its pilot at the Spire Pod, and could be scanned. Ghor appeared to have left it there for maintenance, as several Aerial Repair Drones could be seen tending to it.

On his own, Ghor was seen to be relatively weak in battle, so he tended to rely on this armor for combat situations. The armor possessed a wide variety of weapons: Its main weapon was its Plasma Cannon, which Ghor employed in both a rapid-fire configuration and as a continuous sweeping blast. The suit's arms were also equipped with rapid-fire guns, but could convert into powerful claws for melee combat. Other features included a multi-missile system and thrusters enabling high jumps that generated shockwaves upon landing. Despite its size, the Armorsuit was highly mobile and could perform spin attacks and high-speed rush attacks.

While the suit’s structure left Ghor’s own face exposed, this weakness was negated by an energy shield that protected Ghor from frontal attacks. However, this shield could be disrupted by attacking its rear-mounted generator. Additionally, the Armorsuit could be incapacitated by damaging a glowing red-and-blue module deployed underneath the unit during stationary sweeping attacks.

According to a scan, the Armorsuit also doubled as a gunship. While this was never actually seen, a defeated Ghor was seen trying to convert it into ship configuration in a last-ditch escape attempt prior to his death on SkyTown. However, the critically damaged Armorsuit exploded before this could happen.

Worthy of note is that, despite its size, the entire Armorsuit’s appearance subtly changed along with its owner as Ghor succumbed to Phazon corruption: By the time he confronted Samus, the suit’s grey-green metal had acquired a blue tint, and its orange lights had turned blood red.

Ghor is a cybernetic bounty hunter, capable of merging his body into large mechanisms. The most common of these is his armorsuit, which doubles as a gunship and provides him with a formidable combat arsenal. The merges are often accompanied by a shift in personality, replacing his normally calm demeanor with an aggressive attitude. He demonstrates a high proficiency with all things mechanical and is often called upon for missions requiring computer infiltration or manipulation.

Morphology: Ghor
Shield repels all weapon fire. Powered by a unit on his back.

Ghor's energy shield is capable of repelling all weapon fire, but the back-mounted generator is exposed to attack. Overloading the generator could expose the well-protected critical systems behind his battle armor. Ghor's arsenal is considerable. Plasma-based beam weapons, attack claws, and a multimissile system are at the cyborg’s disposal in battle. These battle systems can be combined and fired at once as a devastating alpha strike. Target is also capable of a high-speed ramming attack, although this is potentially dangerous if performed over a slippery surface.

When stunned
"Shield is temporarily down. Ghor's main CPU is open to attack. Vulnerable to all weapon fire." 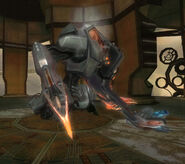 The expanded Armoursuit at the Spire
Add a photo to this gallery
Retrieved from "https://metroid.fandom.com/wiki/Ghor%27s_Armorsuit?oldid=236798"
Community content is available under CC-BY-SA unless otherwise noted.