Ghor-G is Gandrayda mimicking Ghor. It is the fifth form she will take in her battle. As with all of her mimics, Gandrayda will employ Ghor's attacks, but also weaknesses.

Ghor-G begins by using his rapid spin attack. He will then stop and fire his Plasma Beam laser. During this time, the unit underneath him is vulnerable to Morph Ball attacks. Samus Aran can then attack his head. After dealing sufficient damage, Ghor-G fires off his missile attacks (now with electric properties) before his head becomes vulnerable again. Samus attacks the head a final time before Ghor-G returns to Gandrayda form.

Gandrayda takes Ghor's form one last time as she is dying. 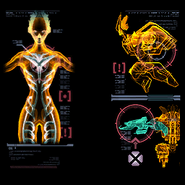