The giant plant flower[1] is a species of flower encountered in the Chozo Ruins. It is the base from which Flaahgra protrudes after its mutation due to Phazon exposure. The flower is massive and dark pink in color, with its long and pointed petals wilting down. The flower itself cannot be damaged, and is harmless to Samus. During the Flaahgra battle, its tentacles will retreat into the ground when Flaahgra has been stunned, opening up channels leading to Bomb Slots connected to Flaahgra's central nervous system. Activating these sends an electric jolt through the flower that damages Flaahgra.

Once Flaahgra has been defeated, the poisonous water is purified, and the flower remains. Samus can stand on it as if it is a platform. If she returns with the Thermal Visor, the flower can be seen giving off a high heat signature, which may suggest that Flaahgra is still alive, but no longer corrupted. After defeating the Chozo Ghosts in the Sunchamber, the Artifact of Wild will appear atop the flower.

It is possible that this flower is a heavy mutation of a regular Bloodflower, as it resembles the poisonous plant, contains toxic roots, and Flaahgra spews toxic spores.

Weeds emerge from the flower after Flaahgra's death.

The water is purified.

The Artifact of Wild on top of the flower. 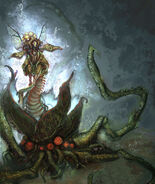 Retrieved from "https://metroid.fandom.com/wiki/Giant_plant_flower?oldid=270344"
Community content is available under CC-BY-SA unless otherwise noted.