In Metroid II, they are always found clinging to a vertical surface in an immobile state. If Samus comes too close, Glow Flies will launch themselves backwards off the wall as they attempt to collide into her with their shell. Whether they hit Samus or not, they will keep flying in a straight line until they reach whatever vertical surface is found on the opposite side and land on it. Their abdomens will constantly flash a light and will continuously repeat their attack pattern until they are killed or Samus leaves the vicinity.

In Metroid: Samus Returns, there are both "normal" green and red Glow Flies. Their flight ability has been removed entirely and they are now restricted to ground locomotion, though they can walk along the walls and ceilings as well. They are infinitely spawned from holes dug up by the creatures. If a Glow Fly spots Samus, it will emit a high pitched cry before it begins to chase her; if it manages to get close to her, it will trigger its glowing abdomen to swell up and explode, causing very high damage. She can prevent the harmful explosion by shooting the insect beforehand or by knocking it back with a Melee Counter.

Red Glow Flies always follow a small path between two nesting holes, with the insects leaving the scene via the second one. Unlike the green variant, they are always running at high speed and will not react to Samus' presence, but will immediately detonate if she comes into contact with them. They are usually found in locations that require careful maneuvering, yet quick movement to get through.

Although never seen in-game, the official guide of Samus Returns states that Glow Flies have a queen in their nests, leading to the assumption that the species follow a society similar to a bee or ant colony's.

"When dormant, they stick upon the wall with their abdomen flashing. When Samus comes close, they will roll up and crash into her."

Inhabitants & Eco System of SR388 (p. 19)
GLOWFLY
"These volatile insects are all too willing to self-destruct in the service of what we assume must be their queen. They make their way from one hole to another with unbreakable focus and singular purpose. Should anything get in their path, their defense mechanism is to explode, dealing heavy damage in the process. Give these creatures a wide berth. If you end up on a collision course with one, shoot them well before they get to you, or suffer the consequences."

Walkthrough (p. 79)
GLOWFLY
"If you go after [the Missile Tank], you run into this volatile ant-like insect. Entering this creature’s line of sight causes it to pop, which creates a sizable explosion from its bulbous hindquarters. As if that weren’t troublesome enough, these exploding nuisances continuously crawl out of their hole, even after detonating. The good news is they’re single-minded; they always walk from their own anthill to the next-closest one. Exploit this trait to manipulate their movements—open a path to another anthill and watch them run directly to it. 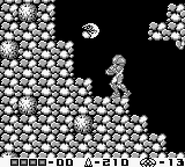 A Glow Fly in Phase 7

A green Glow Fly in Area 5