Wikitroid
Register
Don't have an account?
Sign In
Advertisement
in: Pages with sourced titles, Crateria, Zebes,
and 2 more
English

The Golden Statues[1][2] appear in Super Metroid and are the successors to the Stone Statues encountered in Metroid and Metroid: Zero Mission. They have the same role of guarding the entrance to Tourian, the Space Pirate headquarters on Zebes. An ominous theme plays whenever Samus is inside the room holding the statues.

Each statue represents the four major bosses in the game before Mother Brain. These bosses include Kraid, Phantoon, Draygon, and Ridley. Ridley rests atop the head of Phantoon, while Kraid and Draygon are to Phantoon's sides. Each statue's eyes are made up of glowing orbs and are colored differently for each boss: green (Kraid), yellow (Phantoon), blue (Draygon) and red (Ridley). Because of the importance connected to them, the statues imply that Draygon and Phantoon are affiliated with the Space Pirates, as the other two are already known to be high-ranking members of the marauding organization.

As Samus defeats the bosses depicted, their corresponding statues' eyes will glow intensely before shattering and will each one-by-one release a ghost-like entity out of their hollowed eyes and lose their golden glow, turn into a shade of gray, and seemingly "die". Strangely, all the eyes except Ridley's statue will flash brightly in their respective color; Ridley's will flash purple, despite the eye being initially red.

Once all four are defeated, the entire structure will sink to the bottom of the chamber, caving in the floor and revealing the underwater entrance to Tourian.

TO TOURIAN AND MOTHER BRAIN
"A large conglomeration of harmless golden statues blocks the path to Tourian. Samus won't be able to get down through this section and into Tourian until all of the major boss characters have been duly eradicated." 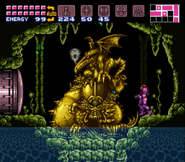 The ghost-like face that emerges from each statue as they "die". 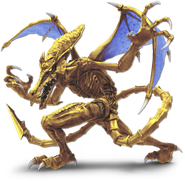