Wikitroid
Register
Don't have an account?
Sign In
Advertisement
in: Pages with sourced titles, Bosses, Chozo,
and 4 more
English

The Golden Torizo[1][2][3] is a Torizo that Samus Aran encounters in Ridley's Hideout on planet Zebes.

The Golden Torizo enters the room by dropping down from a hidden chamber in the ceiling. It adopts the pose of a sitting Chozo Statue before opening its eyes, standing up, and turning golden.

Just like the weaker Torizo, the Golden Torizo is able to spew explosive Item Sphere-like bombs and shoot crescent-shaped energy waves at Samus, though the latter attack is now fired at an very high rate. Instead of its swinging arms attack, it now shoots energy rings from its eyes, which produce a delayed explosion after hitting the ground; the Golden Torizo will telegraph the latter by blinking just before the explosions occur. When very low on health, its open chest may release "egg" formations that quickly "hatch" into bird-like creatures, which charge forward at Samus and then melt away.

The Golden Torizo starts out bright gold, but gradually gets duller as it takes damage, eventually resembling the original Torizo's color scheme. Its weakpoint is its bright teal abdomen. Upon defeating the Golden Torizo, Samus can proceed into the next room, where she will be rewarded with the Screw Attack.

Page 44
"The Golden Torizo, much like a mini guardian, isn't too difficult to defeat. Use a combination of Super Missiles and Charge Beam, hitting the stones he throws to gain power-ups."

NORFAIR AREA E (pg. 71)
THE GOLDEN TORIZO
"Take plenty of Super Missiles to fight the Golden Torizo. Stand close and blast him. Finish him off with the Charge Beam. For refills, blast the stones that the Torizo throws." 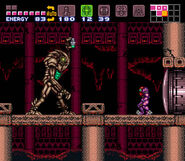 The Golden Torizo catching a Super Missile in mid-flight. 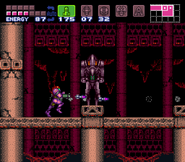 The Golden Torizo steps into the background to dodge missiles 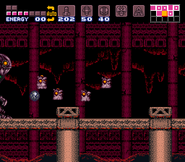