Much like the rest of Ridley's Hideout in Super Metroid, the Golden Torizo's chamber appears to be ancient temple ruins, full of crumbling architecture constructed with pillars and bricks, and decorated with gargoyle-like statues resembling Chozo heads. The stalactites of volcanic caverns are visible in the background.

Samus Aran enters the Golden Torizo's chamber through what initially appears to be a much smaller room containing a single Missile Tank. However, the floor will crumble away when Samus steps on it, dropping her into the main chamber below. The Golden Torizo then drops down from a hidden chamber above the Metal Door, initiating the battle. The Metal Door is unlocked once the Golden Torizo is defeated, allowing Samus to enter the next room, which contains the Screw Attack.

Missile Tank
Upon entering the Golden Torizo's chamber for the first time, the Missile Tank is on a pedestal directly in front of Samus. The Space Jump must be used to jump over the Pit Blocks and avoid falling into the main area of the chamber below.

Super Missile Tank
This is located in the hidden portion of the chamber where the Golden Torizo can initially be found. Samus must clear away Bomb Blocks in order to access the tank. 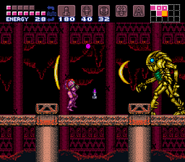 Samus Aran battling the Golden Torizo in its chamber 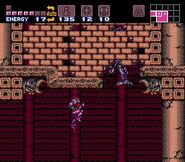 The Golden Torizo residing in the hidden chamber before battle. Only its legs and claws appear visible. 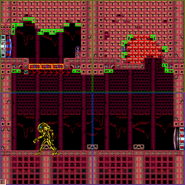 The room, as seen in SMILE
Add a photo to this gallery

Retrieved from "https://metroid.fandom.com/wiki/Golden_Torizo%27s_chamber?oldid=275454"
Community content is available under CC-BY-SA unless otherwise noted.