Wikitroid
Register
Don't have an account?
Sign In
Advertisement
in: Pages with sourced titles, Rooms, Area 5,
and 3 more

The Grand Cavern[1] is a large room in Metroid II: Return of Samus and Metroid: Samus Returns.

Located in Area 5, the Grand Cavern is the fourth in a series of large dome-like caverns that Samus Aran explores during her mission to exterminate the Metroids. Compared to previous domes such as the Power Up Cavern, the Grand Cavern is notable for being very vertical, with the greatest height of any cavern in SR388.

The most significant feature of the Grand Cavern is that it houses the ruins of a large Chozo tower, which Samus can explore to obtain numerous power-ups. There are multiple entrances to the ruins along either side of the tower, and a Dark Chamber can be accessed through the roof.

Additionally, the sides of the Grand Cavern branch off into various tunnels, leading to encounters with Metroids. These tunnels are often lined with deadly spikes, requiring careful use of the Space Jump to navigate. Near one of the Gamma Metroid caves on the right side, a Missile Battery (Return of Samus) or Ammo Recharge Station (Samus Returns) is embedded in the side of the tower, providing a much-needed means of replenishing Samus's missiles while fighting Metroids.

The bottom of the Grand Cavern is flooded with water. Vegetation is also present, including the dangerous red plants.

As soon as Samus enters the Grand Cavern for the first time, she will find a bridge over a lake, with bushes growing over the lower right entrance of the Chozo ruins. Due to the large number of Metroids in the branching tunnels, there are a total of six Metroid Husks in the Grand Cavern.

Due to its size, Area 5 is divided into three sections in Samus Returns, with each section connected by elevators. As a result, the entire Grand Cavern is no longer a single room, with the lower half of the cavern split into multiple smaller rooms located on Area 5's lower and middle sections. However, the upper half of the Grand Cavern is left intact as a single room in the top section of Area 5, and remains one of the largest rooms in the entire game. For this reason, this article focuses upon the single Grand Cavern room in the top section, rather than the various rooms comprising the original Grand Cavern's lower half.

In Samus Returns, the background has been updated with a lot more detail. Building upon the water and bushes originally seen in Phase 7, the Grand Cavern continues Area 5's visual motif of jungles and marshes, with waterfalls and many alien plants populating the scenery. The entire Chozo tower is overgrown with vegetation, and the background shows a large crumbling roof. Met2 Ancient Chozo Ruins plays in this room.

The Stronger Ramulken is now the most common hostile species in the Grand Cavern, with many specimens crawling along the walls of the cavern and tower. Fitting the jungle environment, Blob Throwers also make their home in the Grand Cavern, taking root on the roof of the Chozo ruins much like they originally did in Phase 3.

Two Save Stations can be found near opposite ends of the Grand Cavern. An elevator on the lower right side (next to the Save Station) connects to the middle section of Area 5, while a Teleport Station on the left side can be used to quickly teleport to any previously-visited area of SR388.

In Return of Samus, the Grand Cavern connects to a straight hallway leading to the area's entrance; four spike-lined tunnels leading to Metroids; a cave inhabited by a Gamma Metroid; a vertical shaft in the ruins; a Save Room in the ruins; and two similar rooms on either end of a Gunzoo-patrolled room.

Missile Pod
Samus can jump through the Metroid Husk on the bridge to land in the water below. Navigating a small tunnel on the left will lead her to a Missile Pod.

Missile Pod
Just underneath the second Gamma Metroid cave on the right side of the Grand Cavern, Samus can bomb the wall and reveal a hidden tunnel that will drop her onto a Missile Pod.

Energy Tank
Samus must navigate the Dark Chamber and exit to the Grand Cavern through the opening on the right. An Energy Tank is found underneath the Metroid Husk blocking the entrance.

Missile Tank
There is a large greenhouse-like area on the left side of the Grand Cavern populated by red plants. Using the Space Jump and Screw Attack, Samus must break her way through Screw Attack Blocks to reach the top of the area and obtain a Missile Tank.

Missile Tank
The upper left corner of the Grand Cavern has a Bomb Block that can be destroyed to reveal a Missile Tank.

Super Missile Tank
Samus must use the Beam Burst to kill a Blob Thrower, navigate spikes with the Grapple Beam, and cross over Pit Blocks to reach a Super Missile Tank near the lower left lake of the Grand Cavern. Alternatively, she can return to Area 5 with the baby, who will clear out some crystals and create a shortcut directly to the tank.

PHASE 7: GRAND CAVERN (pg. 51)
"Since the huge cavern of Phase 7 has a lot of long drops, it'll pay to perfect the Space Jump technique when you explore this area. The Spider Ball will also help." 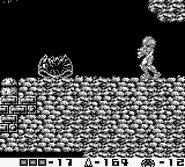 A Metroid Husk at the entrance of the Grand Cavern 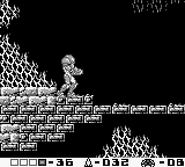 The bridge in the Grand Cavern 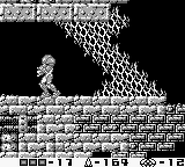 The main entrance of the Chozo ruins, overgrown with bushes 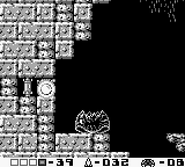 The Missile Battery embedded in the Chozo ruins

The roof of the Chozo ruins, leading into the Dark Chamber

A small cave on the roof of the Grand Cavern