For the creature referred to as "Gravitt" in Nintendo Power issue 31, see Rock Icicle.

Gravitts are a hermit crab-like species native to SR388 in Metroid II: Return of Samus and its remake, Metroid: Samus Returns.

Gravitts hide in the floor, only coming out to attack when Samus Aran comes close. When hidden, only their spiked shell can be seen.

In Return of Samus, Gravitts are only found in Phase 4, in the large cavern containing the third set of Chozo ruins. These creatures are notorious for hiding under destructible sand blocks, so caution should be exercised when traveling on the bottom of a sandy area.

A Gravitt's impenetrable shell protects the creature from any attacks from above, and Samus will take damage if she steps on the spiked shell of a hiding Gravitt. These creatures are vulnerable when they emerge, revealing their bodies as they crawl around the area. If a Gravitt is hiding, Samus can easily kill it by crouching next to it and firing a Wave Beam or Spazer Lazer Beam, which will pass through the floor and hit the Gravitt; a well-placed bomb can also kill a hiding Gravitt, but is not a viable strategy since Samus is likely to touch the Gravitt's shell and take damage.

In Samus Returns, Gravitts are now more ubiquitously found throughout SR388. They also no longer hide in sand blocks, as the blocks are not present in this remake.

These creatures are much more aggressive; once they emerge from their hiding place, they try to stab Samus using their claw-like feet. This attack is counterable, and successfully countering it causes Gravitts to fall over onto their side, exposing their vulnerable underside to Samus's beam weapons. The Gravitt's armor is no longer impervious to concussive weapons, and a single missile or bomb is sufficient to kill one; alternatively, the Wave Beam can be fired from below to bypass the Gravitt's armor, or the Plasma Beam can pass straight through it.

Samus Returns also introduces a later stronger variant: Black Gravitts[1]. These Gravitts are no longer vulnerable to most beams and concussive weaponry. They can still be countered like their weaker brethren, which releases a large amount of Aeion energy; however, instead of falling over and exposing its underside, a countered Black Gravitt is merely stunned. Consequently, Samus can only defeat this variant with the Beam Burst or Power Bomb.

In addition to being able to live underground, Gravitts are able to survive indefinitely in yellow liquid, since a Black Gravitt can be found submerged in the substance in the liquid-filled hall.

"It comes out of the ground and rushes at Samus, then darts back underground."

GRAVITT
"Gravitts look an awful lot like moving rocks; the way they bury themselves until only their tips are visible enhances the effect. Their rocky appearance isn’t just for show; they have strong outer shells but move slowly when compared to most other creatures in the planet’s underground. Defeating them requires explosive weaponry."

GRAVITT
"These creatures hide underground and don’t pop up unless disturbed. You can see the tips of their rocky shells, which can be shot from a distance to force them out from under the earth. They can’t be easily defeated with the Power Beam, but a few well-placed missiles make short work of them. If you allow them to get close, they lunge at you. The lunge isn’t particularly fast and is also counterable. All in all, these foes only cause a problem when other enemies are around."

BLACK GRAVITT
"This creature packs a hardy shell on its back that’s impervious to most attacks. Black Gravitts aren’t particularly difficult to defeat, and the greatest threat they pose comes when they pop out of the ground. Turn on you Beam Burst and let ’em have it. They’ll be out of your hair in no time flat."

A Gravitt in Area 1 in Samus Returns 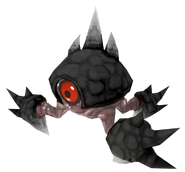 Official artwork of a Black Gravitt in Samus Returns

Metroid: Samus Returns Artbook
Add a photo to this gallery

Retrieved from "https://metroid.fandom.com/wiki/Gravitt?oldid=267989"
Community content is available under CC-BY-SA unless otherwise noted.