The costume changes the orange body of Samus's Varia Suit to green. In Super Smash Bros. for Nintendo 3DS and Wii U onward, the Green Samus suit helmet and breastplate are a slightly lighter shade of red than the default Varia Suit. This color scheme is one that Samus does not have in the Metroid series with any Suit, and was created for Smash; however, the second Samus player wears a similar green Power Suit in the Metroid Prime 2: Echoes Multiplayer, but with orange lights. Samus has had the costume in every single game in the Smash series to date, beginning with the original Super Smash Bros.

On the website for the Nintendo 64 title, this costume was referred to as "mass-produced Samus" (通称量産型サムス?)[2], a reference to Gundam, an anime about giant, mass-produced robots.

From Super Smash Bros. until Super Smash Bros. Brawl, this costume was used when Samus is on the green team during Team Battles. In the latest two games, colored outlines appear around the characters, enabling any costume to be worn in matches.

In Super Smash Bros. Melee, if Samus is fought in Stages 1 or 2 of Classic Mode when set to Very Hard Difficulty, she will appear in her Green Samus costume.

In Nintendo Land, while playing multiplayer in Metroid Blast, the third Samus Mii wears a suit that is colored identically to the Green Samus alternate costume from the Super Smash Bros. series. With the Samus costumes in Nintendo Land being modeled after her appearance in Metroid: Other M, this is the debut of the Other M-style Green Samus later seen in Super Smash Bros. for Nintendo 3DS and Wii U. Just like in Brawl, this Mii wears a green Zero Suit underneath the suit.

In Super Smash Bros. Ultimate, Green Samus puppet fighters are used in the spirit battles for Kanden and S-Tetrimino & Z-Tetrimino (specifically representing the S-Tetrimino in the latter).

"...And here she is in the color schemes of the Gravity Suit from Metroid Prime, Green Samus (a regular in the Smash series), the Light Suit, and Dark Samus. A total of eight colors."

Render of Samus's alts in 64, including Green Samus[2] 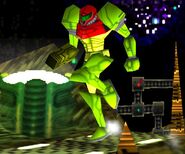 Nintendo Land
Add a photo to this gallery

Retrieved from "https://metroid.fandom.com/wiki/Green_Samus?oldid=284361"
Community content is available under CC-BY-SA unless otherwise noted.