Fragile shell on back

Short Battle
Grenchlers are amphibious apex predators that live in the Torvus Bog region on Aether. Vicious and powerful, they are among the most dangerous creatures native to the planet.

Grenchlers are large, reptilian carnivores with multiple red, beady eyes and massive jaws. In close quarters, a Grenchler can use its sharp teeth to easily tear apart prey and enemy alike. For distant enemies, the Grenchler can also use its single horn to release directed bolts of energy. Its powerful legs can also help it easily close any distance, either by running, swimming or leaping to impressive heights. Most of the Grenchler’s body is protected by thick, grey plates, which are invulnerable to all known weaponry; its tail is its only known weak point. While Grenchlers can survive the destruction of their tails, this leaves the vulnerable tissue of their hindquarters exposed.

While only encountered alive in Torvus Bog, three Grenchler carcasses can be seen in Temple Grounds. 242 shots from Federation weaponry were required to bring one down, while another was electrocuted on exposed wires, and a third one was killed in a power cell explosion. Curiously, all three specimens were larger than those encountered in Torvus Bog.

In Dark Torvus Bog, Samus battles Dark Grenchlers, which are Ing-possessed Grenchlers. A particularly massive Dark Grenchler ended up with Grapple Beam technology stolen from Samus Aran, transforming it into the Grapple Guardian.

Grenchlers are similar to the Baby Sheegoths from Metroid Prime. This is mainly based on the two creatures' similar behavior and attack patterns, as well as the existence of a larger variant and "boss" form of the species (Sheegoth and the Grapple Guardian, along with the previously mentioned large, dead Grenchlers).

The key differences besides appearance is the Grenchler's ability to jump and swim underwater, both skills that Sheegoths do not have. In fact Sheegoths are incapable of swimming and will die if knocked into water. Also, Sheegoths attack by breathing ice, while Grenchlers attack with bolts of electricity and are seemingly more agile than the former Sheegoths. Grenchlers deal more damage as well; at close range they will use a powerful impaling attack, and at long range they will rely on firing strong, guided bolts of electricity which are much harder to evade than the ice blast of a Baby Sheegoth. However, the Baby Sheegoth is capable of freezing its target.

As it is mentioned off-handedly in Echoes that the Luminoth and Chozo had interacted in the past, it leads to a possibility that the two space-faring species may have exchanged local flora and fauna. These introduced lifeforms could have been genetically modified or simply allowed to evolve into their new habitat. This conclusion explains the similarities of many dual-planet species, such as War Wasps, Triclops/Mechlops and Grenchlers/Sheegoths. It also explains the similarities between organisms seen on Tallon IV and life-form styled mechanoids seen on Aether.

Another theory is that Grenchlers and Sheegoths are examples of convergent evolution.

Morphology: Grenchler
Water-based reptilian predator. Well armored and deadly at any range. Its back shell is vulnerable to explosive blasts, however.

The amphibious Grenchler lurks in marsh areas in search of prey. Fearless, it will spring from hiding and attack anything that moves. If it is unable to fell its prey with its powerful jaws, it will fire a potent burst of energy at them. Grenchlers have one weak spot-a genetic defect makes the shell on their back susceptible to explosive blasts. Remove the shell to expose a vulnerable nerve center, then target it to eliminate the creature.

QUESTION: In the Space Pirate stronghold, if you look at the monitors, it seems like they have the concept of having pets. Is this true? From the outside I cannot imagine what sort of pets they would have.

ANSWER: If there are any wildlife that they like, they can take them in as pets. It seems like they like Grenchlers, for example. Personally, I thought it would be fun to walk a Shrieker on a leash...[1] 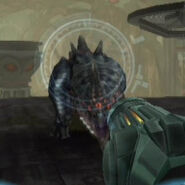 A Grenchler faces off against Samus

A Grenchler viewed through the Dark Visor.
Español Русский
Community content is available under CC-BY-SA unless otherwise noted.
Advertisement