Wikitroid
Register
Don't have an account?
Sign In
Advertisement
in: Featured articles, Pages in need of images, Species,
and 10 more
English

In Metroid II: Return of Samus, they can be found exclusively in Phase 2, constantly circling around a small area in the air, harming Samus if she comes into contact with them. They frequently yield Missile ammo when killed.

Gulluggs reappear in the remake Metroid: Samus Returns, now capable of flying freely through the air and attacking Samus using the needles on their bodies. They are ubiquitous throughout the planet and are one of the most common species found on SR388. Samus encounters some Gulluggs on the Surface, where the game introduces the Melee Counter. Samus is encouraged to use it against the first one she encounters.

In Chozo Memory 2/11, Gulluggs can be seen hunting and feeding on Hornoads by using their needles to stab through the latter's bodies. In the same image, they can be seen flying off while carrying their prey.

There are three types of Gullugg encountered on SR388. Normal Gulluggs are blue and the weakest type. Stronger Gulluggs[2] are pink, stronger, and faster than normal Gulluggs. The final type are Electric Gulluggs[2] which can electrify themselves, making them immune to Melee Counters, similar to Gamma Metroids and by extension, some Alphas.

Enemies (p. 25)
GULLUGG
"This creature flies around and around in the air."

Inhabitants & Eco System of SR388 (p. 16)
"Gullugs start as a nuisance and become a full-blown pandemic the farther into SR388 you go. These spike bats force you to Melee Counter far more than any other enemy, which adds a level of chaos to any multiple-monster encounter. They typically stay well out of melee range and attack by pointing their spiked tips in your direction and launching themselves like bullets. A Melee Counter and a shot from your Power Beam are usually all it takes to defeat them, but fighting them with the counter promises to be a headache. Tread lightly when a Gullug is around."

Walkthrough - Gullugg (p. 34)
"Enemies of the Gullug variety are plentiful in SR388. They’re aggressive, their flight patterns are erratic, and countering them requires precision. Trying to defeat them without a Melee Counter is a great way to lose a lot of health. When you see a Gullug, wait patiently for the click and white circle, counter, then press the Fire button. Once it’s countered, it goes down in a shot or two, but tread lightly before then."
Walkthrough - Stronger Gullugg (p. 77)
"During your journey to obtain Missile Tank M-18, you encounter a faster, meaner version of the Gullugg. This one features a pink hue, and defeating it requires significantly more shots. To make this enemy much easier to deal with, using the Ice Beam and shatter it with a melee attack or a missile."
Walkthrough - Electric Gullugg (p. 149)
"As soon as you enter the high-temperature area on your way to Metroid 31 / 40, you bump into a pair of Electric Gulluggs. These are some of the toughest enemies you come across on SR388. Because these Gulluggs are electrified, they can't be countered and they are also incredibly hardy, meaning it takes a ton of shots to bring them down. So what can be done? Freezing an Electric Gullugg with a charged Ice Beam shot, then shooting it with a missile or hitting it with a melee attack makes short work of this enemy. Your Beam Burst and Super Missiles also work, but those are precious resources that you don't need to waste when an Ice Beam shot can take care of your problems." 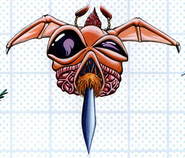 Gullugg as it appears in Metroid II

Gullugg in the Melee Counter tutorial from Samus Returns

A Gullugg in Metroid: Samus Returns

A Stronger Gullugg in Area 4

An Electric Gullugg in the liquid-filled hall