Wikitroid
Register
Don't have an account?
Sign In
Advertisement
in: Articles with non-canonical information, Gunship Features, Spacecraft,
and 19 more

The Gunship[1][2] (スターシップ, Starship?),[3] also referred to as a Hunter-Class Gunship[3] or Samus's Ship,[4] is the hunter-class gunship flown by Samus Aran during the events of Metroid Prime 3: Corruption and Metroid Prime: Federation Force.

In Metroid Prime 3: Corruption, Samus is seen with a new Hunter-Class Gunship that she designed herself, based upon the previous Gunship she used in Metroid Prime 2: Echoes. It is a hybrid of Chozo and Galactic Federation technology, making it completely unique. It was built at the Federation ship yard of Aliehs III.

Its powerful Chozo biotech computer allows the ship to engage in complex activities and grants it basic intelligence. It is later equipped with both a Ship Grapple Beam node on its underside and Federation Ship Missile Launchers, which are stored in the front prows and deploy when firing. It also has an auto-repair function that comes into effect after Ghor attempts to destroy it in the Main Docking Bay of SkyTown. The auto-repair also presumably comes into effect after the ship is damaged by Anti-Aircraft Cannons on Bryyo, but is not shown. Its auto-repair functions are notably faster than they are in Echoes. The Gunship runs on Fuel Gel, evidenced as the ship is shown leaking the substance before the Ghor battle.

Samus enters and exits from the underside rather than the top; the entryway is a lift that descends just behind the cockpit and supports the back half of the ship when it has landed, although a hatch on the roof of the ship resembles the ones on Samus's previous ships in Prime and Echoes, indicating that it is possible for Samus to exit this way. Stabilizing thrusters on the rear of the ship balance it whenever the lift retracts, often with Samus in it.

Samus can enter the Gunship at any time it is near, and the player can then explore the inside of it to a degree. A lot of information can accessed from her cockpit panels, one being data records which counts kills, damage dealt, saves, and places explored in percentage. The other panel is a biohazard scanner that measures her corruption level (which increases steadily through the game's story). Other available functions inside the ship include thruster controls, a retractable Blast Shield, and an offensive mode that displays a HUD onto the ship's windshield and presumably activates whatever weapons the ship has, although they cannot be seen from inside the ship. If the player activates the weapons while the ship is floating in space (either in the beginning of the game or after destroying a Leviathan) the front prows will open and the missile launchers will be visible. Samus has to use her transmission console at the beginning of the game when prompted by Escort Seven, in order to board the G.F.S. Olympus.

Unlockable in the Bonus Gallery are the options to decorate the Gunship with Ship Bumper Stickers and a Mii Bobblehead. Inputting certain combinations on the transmission console will play special messages from the game developers; all of the messages are in Japanese, though Kenji Yamamoto's message contains an acoustic guitar and whistle performance of Metroid Prime Credits. Presumably, these features are non-canonical and only exist as gameplay easter eggs.

Using the Gunship, Samus travels from planet to planet, as well as between locations on a planet. In the beginning of the game, it is shown that it features cryostasis technology so she can preserve her body and hibernate for long travels. Its interior features includes mobile energy-recharge system, microfactories producing ammunition, and an advanced medical bay, likely serving as in-universe explanations for its functions in saving the game and recharging Samus's energy and ammo.

The Gunship has a much more active role in gameplay than in the previous games of the series. Samus is able to control her ship via the Command Visor that interfaces with the Chozo biotech computer. Samus can lock onto Command Icons and command her Gunship to land, fire Ship Missiles, commence a Bombing Run or to pick up and drop cargo with the Ship Grapple. This is the first instance in the Metroid series where this was made possible. It is also the first time Samus's ship is seen using weapons.

The Gunship no longer recognizes Samus when her Phazon corruption attains a level higher than 75% upon landing on Phaaze, seemingly because the high Phazon concentration alters her DNA to a point where her Gunship fails to recognize her as the owner. If Samus attempts to enter her ship, the message "Phazon corruption levels at critical. Unable to use ship." will appear onscreen, and a voice saying "Invalid command" will be heard from the ship.

This Gunship is also present in Metroid Prime: Federation Force, which takes place after Corruption. It can be briefly seen flying over the sky on Excelcion as the Federation Force lands at the start of M04: Containment, and later flies over the G.F.S. Daedalus in M11: Uplink. Later, Samus comes to the aid of the Force on Bion, destroying the Rohkor Beetle in M12: Last Stand using her Gunship's Missiles before it can kill the Marines. The Gunship is seen flying over the abandoned factory site on Talvania during M13: Phantom. At the end of the game during M22: Convergence, Samus escapes the Doomseye and allows the Federation Force, who ended up floating off into space, to latch onto her Gunship and be brought to safety.

SAMUS'S SHIP (pg. 09)
"Over the course of the game, you will use Samus's Ship to travel to many planets, often touching down at multiple landing sites. Whenever you stand on the hatch of the ship, you will have the option to Save, Enter Ship, Save And Enter Ship or Cancel. Samus's energy and weapon will recover when either Save, Enter Ship, or Save And Enter Ship is selected. Once in the cockpit, you can select destinations on your current planet if multiple sites are available. When you get the ability to travel to new planets, you can select new planetary destinations by selecting the Galaxy Map, then picking the planet and landing site you want." 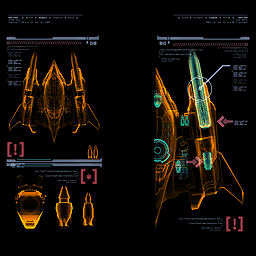 Hunter-Class Gunship
Entering the ship will allow you to recharge, reload, and save.

Based on the previous version, the new Hunter-class gunship is a fusion of Federation and Chozo technology. Designed by Samus Aran, this one-of-a-kind vessel was custom built at the Federation ship yard of Aliehs III. It is equipped with a powerful Chozo biotech computer that can interface with Aran via a Command Visor unit. The ship contains a mobile energy-recharge system, microfactories designed to produce ammunition, and an advanced medical bay.

(After Ghor) Gunship has been damaged. Unable to fly in its current state. Autorepair functions initiated.

(On Phaaze) Gunship no longer identifies you as Samus due to near total corruption. Access to ship is not permitted.

Based on the Hunter-class Gunship, the new Tallon-class Strike Gunship is a fusion of Federation and Chozo technology. Designed by Samus Aran, this one-of-a-kind vessel was custom built at the Federated Shipyards of Aliehs III. It is equipped with a powerful Chozo biotech computer that can interface with Aran via a Command Visor unit. The ship contains a mobile energy recharge system, microfactories designed to produce ammunition, and an advanced medical bay.

Data records switch
"Switch activates various data records that have been tracked during your current mission."

Thruster panels
"Security panels are in place. Operate nearby switch to open and extend thruster controls."

Helm controls
"Helm controls allow you to set your ship's course and fly to known destinations."

Thruster switch
"Use this switch to extend the manual thruster controls. Operate only while in flight."

Saving
Gunship
"Stand on the hatch of the Gunship and select SAVE or SAVE AND ENTER SHIP to save your progress and restore your energy and missiles."

Travelling to Other Planets
"Use the controls directly in front of Samus to travel to other planets or other landing sites. First, select the planet you want to go to, and then select the landing site."

Other Devices
"The Gunship is equipped with a radio and a device that allows you to check your battle log. Use them as the game progresses, or according to the instructions displayed on screen."

Scott Petersen's stove was used to create some of the 30 sound effects for the Gunship.[5]

The Gunship was intended to have a role in the original concept for Corruption, in which Samus would undertake bounty hunting missions. As rewards for her bounties, she would receive upgraded capabilities for herself and her Gunship. Prototypes for further uses of the ship were too large for the Wii to handle and thus had to be scaled down.[6]

An ability to call in the Gunship to provide cover fire in combat was prototyped, but not added to the game. Retro Studios never considered gameplay in which the Gunship was manually flown, due to the difficulty in making it work with the Metroid Prime formula.[7]

The ship's thrusters, which are activated through Context-Sensitive Mode

The Gunship in Federation Force