In Metroid II: Return of Samus, two Gunzoos can be found patrolling a single room in the Phase 7 ruins. Gunzoos have the ability to levitate, and they alternate between moving horizontally and vertically. Gunzoos are equipped with two forward-facing weapons and a third weapon aimed at a downward angle. Their projectiles cause small explosions upon impacting the walls or floors of the ruins. When they fire their forward weapons, their back armor is slightly ejected backward before snapping back into place, resembling a blowback system; this does not occur when Gunzoos fire their downward weapons.

Gunzoos are heavily armored, taking a lot of firepower to destroy with the Power Beam, Ice Beam, or Wave Beam. The Spazer Laser Beam can make short work of a Gunzoo, and two missiles will also destroy it. The most effective means of battling a Gunzoo are the Screw Attack or Plasma Beam, since either weapon can defeat this robot in just one hit. When destroyed, Gunzoos frequently drop large Energy Capsules, making them useful for quickly replenishing Samus's energy.

In the remake Metroid: Samus Returns, Gunzoos have been redesigned to behave more similarly to Automs. Each Gunzoo is confined to moving along a single green laser rail, which stretches across the room either horizontally or vertically. When Samus enters a Gunzoo's vicinity, it activates a red laser beam in a straight line tangental to the rail, and the Gunzoo moves from one end of the rail to the other. The Gunzoo can also rotate to change which direction the laser is facing.

"This multi-gunned robot fires at anything that moves."

Inhabitants & Eco System of SR388 (p. 20)
GUNZOO
"Gunzoos function more as obstacles than as threats. Their movement is confined to a single laser rail while they persistently fire a laser in their target’s general direction. A Gunzoo can change the trajectory of its laser in one of two directions, depending on the angle of its rail. Overall, they don’t present a great threat and can be easily avoided if you keep moving when you see one."

Walkthrough (p. 143)
GUNZOO
"The Gunzoo is another member of the Chozo security system. This robotic enemy only moves along the green rail it’s mounted to, so pay close attention to the rail to figure out where you can go to avoid them. A Gunzoo’s laser is its primary method of attack, which it fires in a straight line in an attempt to drag it over or under you and deal damage. Gunzoos are easy to avoid if you don’t stand still while near them. They’re also destructible, but you’re better off avoiding them whenever possible."

Gunzoo sprite from Return of Samus 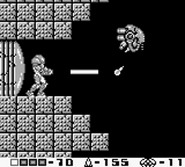 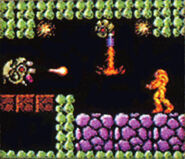