Negates environmental damage caused by Acid Rain, Fuel Gel, and possibly concentrated Phazon.
The Hazard Shield (referred to as the Acid Shield Unit by NZG41) is a suit enhancement from Metroid Prime 3: Corruption that protects Samus Aran from the environmental hazards of Fuel Gel and the Acid Rain of the Pirate Homeworld.

In Corruption, the Hazard Shield takes the role of the Phazon Suit and Light Suit from previous Prime games by reducing overall damage and allowing Samus to move through harsh environments that she would normally not be able to travel through. It is Space Pirate technology, and it was designed so that the Pirates may operate safely in their Homeworld's constant acidic rainfall.

The Hazard Shield is found on the Pirate Homeworld and provides an orange "Force Field" effect on Samus' armor and Arm Cannon. When she enters hazardous environments, the Hazard Shield will protect her from various harmful substances. Interestingly, when Samus enters a pool of concentrated Phazon after obtaining the shield, the orange shield will still activate despite the fact that Samus is already immune to the negative effects of Phazon thanks to her PED Suit. The Hazard Shield seems to view Phazon as a hazard, and rightly so; Phazon has high radioactive and mutagenic properties which is fatal to weaker bioforms. It is unknown if the shield actually does stop Phazon damage, as the PED Suit will absorb it regardless and it does not lower or halt Samus' increasing level of Phazon corruption, following her fight with Omega Ridley and her arrival on Phaaze.

The Hazard Shield's appearance is visually rather insignificant when compared to other, better-known suit upgrades such as the Varia Suit or Gravity Suit. As opposed to changing the overall color, design, or shape of the suit, the Hazard Shield simply adds pulsating purple hexagonal plating to Samus' already existing shoulder pads and adds an extra plate just below the nape of her neck. However, when coupled with the blue vein-like stripes that appear on the suit as the game progresses, the addition of the Hazard Shield causes Samus to become more similar in appearance to Dark Samus.

Unlike past suit upgrades, which were remnants of ancient Chozo, Luminoth, or Alimbic technology designed to integrate with Samus' Power Suit, the Hazard Shield is a piece of technology designed by the Space Pirates to enable them to exist on their own planet, and therefore may not integrate as flawlessly with the Power Suit as other upgrades can. It may also be because the Hazard Shield upgrade only enhances the defensive shield on the Power Suit instead of directly adding another layer of armor.

While it turns darker along with the rest of her suit over the course of the game, after Samus defeats Dark Samus and is freed of corruption, the Hazard Shield is shown to contain a purple hue similar to the Gravity Suit. This color can also be seen when the Hazard Shield is first obtained.

Samus discards the Hazard Shield at the end of Corruption along with the PED Suit. 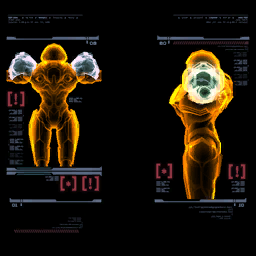 This modification increases your defensive shielding.
The Hazard Shield can resist the caustic effects of both acid rain and Fuel Gel, allowing you access to previously inaccessible areas.

The Hazard Shield in Item Form.

Samus about to acquire the Hazard Shield.

The Hazard Shield integrates itself into Samus' Power Suit.

Samus dives into Phaaze's Sanctum in the Hazard Shield whilst in permament Hypermode.

The Hazard Shield is cleansed of Corruption.

The Hazard Shield in the Metroid Prime Trilogy