The Head Quarantine Officer is featured in Metroid: Other M. He awakens Samus Aran from her bed in a quarantine room, telling her that "everything is normal". After the other Quarantine Officer asks her to go next door, he then prompts her to start a training sequence and directs her throughout it.

It is revealed that he has some relationship to the ringleaders on the BOTTLE SHIP as MB states that particles of the baby and Ridley were removed from Samus' Power Suit and imported to the ship. The officer states that he "polished" her suit during the conversation, which implies that he took the particles that were sent to the BOTTLE SHIP. 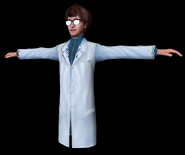