Hell (奈落?)[1] is a room in Brinstar where the Etecoons live. It appears in Super Metroid.

The room, which is a vertical shaft, is referred to as "Hell" in Super Metroid storyboards, referring to the fact that the shaft is relatively deep underground and surrounded by thorns and numerous enemies. Samus is not required to enter this room, but should she fail to jump over a gap in deep Brinstar, she will fall to a chamber underground where her only alternative to get out is through "Hell". A Save Station is in this area, but it is not recommended for use if she cannot Wall Jump. When Samus enters the shaft, she finds the three Etecoons singing, and then they start to jump off the walls. Samus must follow their example, bouncing up the walls quickly and efficiently.

The room features the dark blue background and jungle texture that is a staple feature throughout Brinstar. At the bottom, there are four red flower blooms, three on the bottom and one atop Samus. The shaft is mostly wall-to-wall, except for a few small ledges that Samus can use. One of these ledges leads to a tunnel that will bring Samus out to an area where she can escape quicker. Otherwise, she can continue to jump up the shaft until she reaches the top, which features an exit. She can achieve this by using the Spring Ball, jumping up that one wall, or jumping to the tunnel and then morphing in midair. One of the Etecoons, upon reaching the top, will jump into the tunnel and be seen bouncing around.

From outside, the top of the Etecoon shaft cannot be reached; because the door remains a Metal Door for the rest of the game. The aforementioned tunnel exit also cannot be used from outside.

Power Bomb Tank
In a small alcove through a tunnel on the right wall.

C. JUMP LIKE THE ETECOONS (pg. 49)
"These three little guys will show you the Triangle Jump technique. You can jump back and forth off of the walls as you go up the long shaft."

The room and the green Brinstar shaft, in SMILE.

The storyboard that names the location as such, translated by Metroid Database 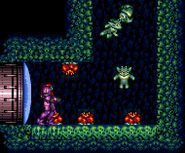 Closeup of the Etecoons starting to jump.