The Hopping-Mad Corridor[1] is a room in Norfair. It appears in Metroid and Metroid: Zero Mission.

Like numerous other rooms in Norfair, the Hopping-Mad Corridor consists of natural columns of glass bubbles over a pool of lava. In Zero Mission, the background is detailed with odd honeycomb-like formations and purple gelatinous material. This treacherous corridor is infested with hostile creatures: Dragons lurking in the lava below, Gerutas hovering near the ceiling, and Sovas crawling along the columns.

In the original Metroid, the Hopping-Mad Corridor is one of two rooms (along with the Path of Destruction) in Norfair to feature large boxes composed of 6x6 breakable blocks. To avoid the lava and Dragons below, Samus can use her beams and/or bombs to break away enough of the blocks so that she can use the remainder as platforms. This can be tricky due to the dripping bubbles and stalactites between the two boxes, which require Samus to leave enough room between herself and the ceiling in order to jump between the two boxes.

In Zero Mission, the room is comparatively much less of a puzzle, with the large boxes removed. To compensate and make it easier to cross the lava, the columns of glass bubbles are higher and spaced closer together.

While the Hopping-Mad Corridor itself is not particularly significant, since it does not contain any items or upgrades, it is part of the optional path through Norfair that leads directly to the Wave Beam.

138 HOPPING-MAD CORRIDOR (pg. 59)
"The path through Norfair's lower-middle section is made up of natural columns that rise from the lava. As you hop from one column to the next, blast enemies to keep them from knocking you into the searing liquid."

The Hopping-Mad Corridor in Metroid.

Samus enters the Hopping-Mad Corridor in Victory Techniques for Metroid. 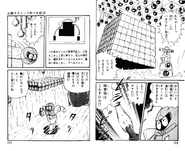 Samus figures out how to get past the red blocks.

A Dragon in the Hopping-Mad Corridor in Zero Mission

The Hopping-Mad Corridor in Zero Mission