Hornoads are creatures that live on the planet SR388, where they are at the near-bottom of the food chain. Their name comes from a portmanteau of the words horn and toad.

In Metroid: Samus Returns, Hornoads are squat, green-colored creatures with wide, toothy mouths with no lips to cover them. The backs of their rounded bodies are studded with short spikes, and their only appendages are a stumpy tail and a pair of three-toed legs, the latter of which they use to hop around and launch themselves at enemies. Hornoads are relatively weak and, like all other creatures on SR388, release Aeion when killed, often with life energy and Missile ammo. They primarily live close to SR388's Surface, though a tougher, red-skinned breed called a Stronger Hornoad[1] that can spit green acid from a long range also inhabits the later areas.

The Hornoads' original design in Metroid II is somewhat simpler. Their legs featured two clawed-toes only, one on each opposite ends. They had minuscule spikes on their backsides and had lips on their mouths; due to their artwork and in-game sprites never showing the creatures with their mouths open, it is unknown if they possessed any teeth. As a result, they had no projectile as well. Their bodies were more rounded and had no tail.

When an X Parasite infects a Hornoad, the former manipulates its host's DNA to alter its physiology and behavior, resulting in a Hornoad that is greatly intimidating, dangerous and driven by a need to further the spread of the X. In Metroid: Samus Returns, their teeth and dorsal spikes are larger and further pronounced, in addition to gaining an extra pair of eyes and warty, fuchsia-colored skin. They also acquire two organs in place of their tongues capable of spraying a yellow-colored substance not unlike the Stronger Hornoad, which spits a small, green projectile. Overall, their appearance is grotesque in comparison.

The original design of the X-infected Hornoad in Metroid Fusion did not possess any claws or spikes on its body while also lacking a second pair of eyes and a tail. Its back was covered in a mass of warts. Contrary to its recent appearance in Samus Returns, it featured lips which were often pulled back in order to bare its teeth and, along with the occasional twitching of its head in-game, gave the creature traits akin to rabies. The X-infected Hornoad maintained its sickly fuchsia-colored skin, though its lower half had a stronger shade of blue.

Once the infected Hornoad host is killed by outside means such as with Samus' arsenal, the X that inhabits the body leaves with a copy of the Hornoad's DNA and memories, allowing it to transform itself into a mimicry of the infected victim. However, the mimic is a replica of the described mutated Hornoad above and not of the creature in an uninfected state. Thus, the many Hornoads encountered in Fusion are both infected Hornoads and X Parasites disguised as mimics. Metroid: Volume 1 shows an X killing its Hornoad host immediately upon invading its body and replicates it mere moments later, demonstrating that the X will not always choose to live within a body and control it.

Hornoads had long existed on SR388 until a steady decline in the planet's entire wildlife population seemingly began with the appearance of the X Parasites, which slowly turned the planet into a graveyard of skeletons. The Metroid Manga shows a Hornoad fleeing from a group of X before getting infected by them, resulting in all of its soft organic tissue dissolving. With only its bones remaining, the X mimicked their victim soon afterwards.

When the Chozo race first came to SR388 with the intention of colonizing it, they had no knowledge of the danger that lived within and eventually came into conflict with the X. The Chozo Memories in Samus Returns shows this first encounter with the avian race fighting off a mass of X Parasites as they witness Hornoads being turned into X hosts. The Chozo eventually created the Metroid species which began to carry out their purpose: to feed upon the virulent X along with all of their infected victims and mimicries (seen in the Chozo Memories with both X and infected Hornoads being eaten by the artificial lifeforms). Afterwards, the population of wildlife in general returned to a normal state and the X became extremely scarce, however the Metroids had become the new apex predator and would occasionally feed on SR388's other animals such as Hornoads (as shown during Samus Aran's mission on SR388).

Unfortunately, not knowing what the Metroids' purpose was on SR388 by anyone other than their dead Chozo creators, Samus had been ordered to wipe out the artificial creatures, allowing the low population of X to multiply once more unchallenged. After she defeated Proteus Ridley and left the planet with the last living Metroid, a lone Hornoad is seen in a post-credits cutscene gnawing on Ridley's cast-off cybernetic claws before its attention is drawn to a fleeting X and is soon turned into an X-infected Hornoad.

Years later, when Samus was escorting Biologic's research team on SR388, she was attacked by a lone X-infected Hornoad in a cave. Upon being hit with a Missile, the parasite reverted to its gelatinous form and infected Samus, eventually leading to the removal of parts of her Power Suit and her inoculation with the Vaccine "Metroid", creating the Fusion Suit. The portions of Samus' suit infected by the X would later become the SA-X. When Samus was sent to investigate an explosion at the Biologic Space Laboratories research station, she found the station overrun by the X. Hornoads were among the specimens infected and mimicked by X, and could be found on the Main Deck and in Sector 1. During Samus' battle against the SA-X, the latter transforms its own body into a monstrosity that shares features with a Hornoad's physiology, likely a result of the SA-X containing the DNA of the Hornoad that infected Samus in the first place.

In Fusion, uninfected Hornoads would continuously spawn from grey-green hives in the background, although no such structures were ever found on SR388.

"These amphibious creatures are native to planet SR388, the site of Samus's first mission. Now infected with the X, the Hornoads have become dangerous foes. Samus must destroy these and any other contaminated creatures encountered on the research station."

Inhabitants & Eco Systems of SR388 (p. 16)
HORNOAD
"One of the first creatures you encounter on SR388, Hornoads are simple beasts that look much more ferocious than they are. They hop at you and spit acid (depending on the color of Hornoad), but ultimately you can breathe a sigh of relief when one of these scaly creatures rears its head."

Walkthrough (p. 32)
HORNOAD
"The first formidable enemies you encounter are these green, two-legged, armless, hoppy creatures. You can destroy them with regular shots from your Power Beam or missiles, but what really knocks them out is a Melee Counter. There’s not much to fear here, but don’t take them lightly. As with every creature on this planet, if you let them group up with other creatures, you’re in for a rough time."

Walkthrough (p. 85)
STRONGER HORNOAD
"You’ll undoubtedly recognize this enemy’s green cousin. This red one has a new trick for you to contend with—acid spit. It shoots a green glob in an arcing path toward you. It doesn’t travel fast or particularly far, but it can make things difficult in a tense situation. The good news is that this enemy can be countered in the same way as its green counterpart, and you can melee the acid spit without consequence." 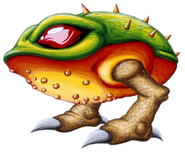 Artwork of a Hornoad from Return of Samus

Normal Hornoads from an X Spawn jumping in the background will enter the foreground when infected.

Two uninfected Hornoads, along with what appears to be a nest, in Metroid Fusion

A Hornoad in the American commercial for Fusion 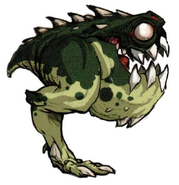 Artwork of a Hornoad from Samus Returns

Hornoads being infected by X in Chozo Memory 4/11 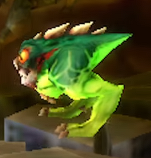 A Hornoad from Samus Returns

A Stronger Hornoad from Samus Returns