Hunter Ing are very different in physiology from Warrior Ing, in that they have only four tentacles which intertwine in a mass of black wires around a glowing sphere composed of red particles, which is the main body and/or eye. They are capable of phasing in and out of the current timespace, making them unable to be hurt or locked onto until they return to normal. When they possess a light creature, as well as increasing their strength and durability, they also grant it this ability to phase in and out of the local timespace, vastly increasing the creature's threat level. The Hunter Ing do not move fast, but can be quite devastating when they attack.

Hunter Ing are ranked very highly among the other Ing. Among members of the Ing Horde, only Hunter Ing are allowed to assume possession of the Pirate Commandos, and even then competition is fierce. Their main diet seems to be the Nightbarbs inhabiting Dark Aether.

Hunter Ing cannot use energy-based attacks like Warrior Ing, but instead whip at enemies with their tentacles from long distances and shift in and out of the current timespace, attacking enemies from another dimension. When they are intangible, they can lunge themselves at Samus, entering her body and temporarily paralysing her as well as scrambling the visor before exiting her (these are likely failed attempts at darkling possession). In this form, they can be tracked with the Dark Visor, but are quite difficult to lock on to due to their constant movement and teleportation out of the local timespace. The easiest way to defeat them before getting the Annihilator Beam is to fire normal shots at them; they will turn intangible if Samus fires a charged shot. Other effective ways to kill them include supercharging a nearby Light Crystal or Beacon to attract and incinerate them or using the Sonic Boom - a Hunter Ing can be eliminated with one successful shot. The Screw Attack can also be used.

Hunter Ing can be found predominantly in the Dark Torvus Bog and Sky Temple Grounds, though some can also be seen in the Dark Agon Wastes and Ing Hive.

The Hunter Ing patrol the lands of Dark Aether in search of the Horde's enemies. They can render their bodies intangible, allowing them to ambush their targets with ease. Hunter Ing can generate long, deadly tentacles, which they use with great effect in battle. Cunning and relentless, the Hunter Ing will seize their prey or die. 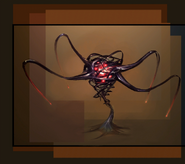