The Hyper Grapple is the fourth and final Hypermode attack. After defeating Omega Ridley in the Pirate Homeworld's Leviathan, Samus Aran gets bombarded with more Phazon, further corrupting her to 75% Corruption. Samus then obtains the item.

This attack is used to destroy certain formations like the Hyper Missile barriers but with a sort of eye stalk sticking out of it. Samus can latch on and inject Phazon into it until it breaks. It is also very useful of the final run through Phaaze, as Samus can attach herself to the numerous Phaz-Ing that populate the area and quickly drain out her Phazon meter.

The Hyper Grapple is the last obtained item upgrade in Metroid Prime 3: Corruption. 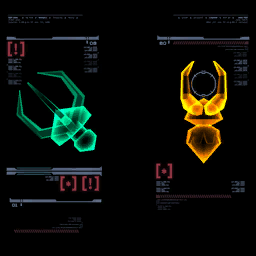 The Hyper Grapple enhances your Hypermode Grapple Beam with Phazon energy.
While in Hypermode, press and hold

while targeting a Grapple Point

to attach. While still attached, pull the Control Stick down

to siphon energy and push the Control Stick up

The addition of Phazon energy to the Grapple Beam also increases its effectiveness against enemies.
The Hyper Grapple is the only way to energize objects with Phazon energy.