For other uses, see Hypermode (Disambiguation).

Hypermode is a state in which a creature is powered up using the strange properties of Phazon. Introduced in Metroid Prime and expanded on in Metroid Prime 3: Corruption, Hypermode can seemingly be achieved by organisms or mechanical beings that have sufficient control over Phazon, though with Federation Marines and Space Pirates, this mode is activated by injecting a small amount of Phazon into their weaponry using a device such as the PED. In Hypermode, creatures gain additional health and more powerful attacks.

See here for a directory of creatures and enemies that can enter Hypermode.

In Metroid Prime, Samus enters a state called Hyper-mode during the final battle with Metroid Prime itself when she steps in a pool of liquid Phazon generated by Metroid Prime. The Phazon Suit siphons the liquid Phazon up through itself and out Samus' arm cannon, changing its physical shape drastically (its mass increases, turns black with blue veins covering it). It can then fire a continuous stream of Phazon energy in a chaotic manner (compared to the precise and controlled Hyper Beam in the third game). This attack is known as the Phazon Beam. This is the only way to damage the second form of Metroid Prime. This Hyper-Mode may be considered a precursor to the more-evolved system used in Corruption.

In Metroid Prime 3: Corruption, Samus Aran, Rundas, Ghor, and Gandrayda are infected with Phazon by Dark Samus. This causes their bodies to produce a constant supply of Phazon. After their recovery, the Galactic Federation equips them with PEDs, which allows them to enter Hypermode through the use of their internal Phazon, at a cost of their own energy. However, unbeknownst to all, this also puts them at risk of corruption by Dark Samus. Only Samus succeeded in resisting this corruption, while the others, who had virulent Phazon spreading within them for two weeks prior, fell under Dark Samus's control and were compelled to attack Samus. When in Hypermode, strange blue dots appear to be drifting everywhere. These appear to be the Phazon particles, infecting the atmosphere. They are most likely exhaust from the PED rather than indications of nearby Leviathan corruption (as they can be seen on the G.F.S. Olympus, Norion and G.F.S. Valhalla, all without a Leviathan).

In the Corrupted Pool on Bryyo, after shooting three Phazon Vine nodes, Samus unintentionally engages the "Corrupt Hypemode" status. After venting out, Aurora Unit 242 receives the reading and decides to look further into this state. While Samus is searching for the Ship Missile upgrade, the AU returns with a report: moments after Hypermode is active, the Phazon within Samus will start overreacting, causing the corruption. Unfortunately, the Federation did not foresee this error, unknowingly putting Samus and the other bounty hunters in great danger, a fact for which AU 242 apologizes.

On Phaaze, Samus's PED becomes unstable and leaves her in permanent Hypermode status, though with a few adjustments.

In Metroid Prime 3: Corruption, Samus can achieve Hypermode by sacrificing some of her energy from one of her Energy Tanks after obtaining the PED Suit. In Hypermode, Samus's suit becomes invincible to most attacks, and her weapons are powered up, assuming she has the appropriate upgrades. The weapons are:

Hypermode is governed by a bar on top of the screen that replaces the health bar. Under normal conditions, this bar is white, and decreases when Samus uses a Phazon attack.

When the Federation implemented the PED function, they included an Auto Vent function; Hypermode automatically ends after 25 seconds due to safety purposes.

After experiencing a Phazon overload on Bryyo, Corrupted Hypermode can be entered after 10 seconds of regular Hypermode. In Corrupted Hypermode, the Phazon bar turns red and constantly increases. The bar can be increased by being hit by enemies' Phazon attacks, such as the pulses used by Phaazoids. If this happens she has only 5 seconds to vent Phazon before she is fully corrupted. If the bar is completely filled up and the five seconds are over, a cinematic shows Samus suffering Terminal Corruption and turning into another Dark Samus. Corrupted Hypermode can only be exited by emptying the Phazon bar through repeated use of Phazon attacks or by waiting 25 seconds for the auto-vent, which does not restore any of the energy vented; manual exiting is disabled. Manual exiting is the only way to restore unused energy - any form of automatic venting or Hypermode failure simply removes the Phazon from the system. However, corrupted Hypermode has its benefits: If Samus needs to attack several targets with Hypermode, not only does it prolong Hypermode time, but Samus will regenerate her Phazon in this state if hit by enemies, so she can strategically allow herself to be hit to give herself extra Phazon to use for attacks, while being careful not to overload.

During Hypermode, Samus' vision is shown in greyscale (except for certain enemies, objects, and obstacles), no visors can be used (aside from the Combat Visor), Hand Scanners cannot be interfaced with, and only the Phazon-enhanced equivalents of normal weapons (such as the Hyper Ball) can be used. Strangely, the Screw Attack seems to be exempt of this, as it can be used even when in Hypermode (albeit with blue Phazon energy instead of yellow energy). Morph Ball Bombs can be used in Hypermode until the Hyper Ball is obtained, but Missiles, Ice Missiles or Seeker Missiles cannot be used at all.

Certain enemies have attacks that can cause Hypermode to fail, such as the Pirates' Phazon grenades (can also cause extreme Phazon Overload), a Phazon Metroid's discharge attack or a Phazon Hopper's shockwave attack while it is in Hypermode itself. Some of these attacks will usually also send Samus into critically corrupted Hypermode if she is not in Hypermode when she is hit. If Samus is involuntarily sent into Hypermode the red bar will be almost completely full, and Samus will have a few seconds, if not less, to vent her Phazon completely or to a reasonable level to await auto-vent. A number of Phazon blasts from Hypermode-engaged Pirates will also send Samus into corrupted Hypermode, even if they were not in Hypermode when hit by the blasts. In addition, contact with Fuel Gel or Acid Rain while in Hypermode will trigger a "Hypermode Failure" if Samus is not equipped with the Hazard Shield. Samus will also be forced out of Hypermode when she enters any Save Stations while in Hypermode; the energy lost in the Energy Tank, if she is not in Corrupt, is not restored when she saves; all other Energy is, however, restored; for instance, if Samus enters Hypermode, fires one Hyper Beam shot, and enters a Save Station, she is regenerated to all of her Energy Tanks minus 3-4 Energy.

On the planet Phaaze, a high Phazon concentration causes Samus to enter a permanent state of Hypermode. The regular health bar is replaced by a yellow Phazon level bar, the length of which is dependent on the number of Energy Tanks Samus has collected throughout the game. The bar constantly increases at a slow rate, as well as when Samus takes damage. It can only be decreased by collecting Anti-Phazon Units, by draining energy into foes using the Hyper Grapple, or when a Phazon Puffer absorbs her energy. When the bar is completely filled, Samus becomes corrupted and the game ends. Because she is now permanently in this state, she has access to her other visors and her Combat Visor no longer displays the area around her in monochrome colors. It also takes on the same appearance and features as the regular Combat Visor, regaining the minimap, radar, etc. Interestingly, being exposed to Phaaze's atmosphere has caused Samus to reach a level of corruption likely above 75%, causing Samus' Gunship to fail to recognize her and thus deny her entry and she presumably loses any control over it, effectively preventing the player from saving the game from that point, as there are also no Save Stations on the planet.

Space Pirates (except Berserker Knights and Lords), Crawltanks, some Phazon-mutated creatures (such as the Phazon Hopper), Tinbots and the corrupted bounty hunters can all enter Hypermode. Enemies in Hypermode gain resistance to non-Phazon attacks and more powerful attacks. They also will look different, often being tinted blue and having small Phazon tendrils emanating from them. Enemies tend to roar or taunt Samus right before transforming.

Phazon inside Samus' body. The cluster's mass increases with each Leviathan guardian defeated, and when Samus lands on Phaaze.

Samus manually vents all of her Energy via her PED on Phaaze. 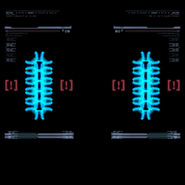 Scan images from the Hypermode category of the Inventory.

Image from a US patent ([1] US Pat. 7896733) filed by Kensuke Tanabe concerning Hypermode
Add a photo to this gallery
Retrieved from "https://metroid.fandom.com/wiki/Hypermode?oldid=270281"
Community content is available under CC-BY-SA unless otherwise noted.