The "Ice Beam Gate Room" is a room in Norfair. It appears in Super Metroid.

This room is found immediately to the left of the entrance shaft of Norfair. It can only be accessed once Super Missiles have been obtained, as the door to it is a Green Hatch. It appears as a long corridor of metal scaffolding built over a natural cave. There is a thin tunnel above the room lined with pipes, through which a single Sova crawls. Above this tunnel is a short shaft, inaccessible from below, with three floors of Pit Blocks that crumble upon impact, and lead back into the main room. Under the floor is a short drop into an untouched, cavernous passageway with a single midair platform. This is populated with more enemies.

A pair of shutters along the main path closes when Samus approaches, preventing her from continuing on unless she has the Speed Booster to run past them. Beyond the second shutter is a door to the next shaft, which leads to the Ice Beam. The floor here has a pair of Boost Blocks; and under this a Power Bomb Block. Once Samus collects the Ice Beam from a nearby room, she can drop into the above shaft to get into the ceiling tunnel, and roll to the right end of it, where a Pit Block will drop her back into the room. Later, Samus can use a Power Bomb to destroy the block and drop into the lower passage; which is one of two paths leading toward Crocomire.

Booster Run (pg. 18)
"By using the Speed Booster, you can run past the falling gates here."

Escape (pg. 18)
"Fall through the blocks in this shaft, then roll right, to the exit."

A. BEAT THE LOCK (pg. 62)
"Only the Speed Booster gives you the quickness to race under the closing gate before it locks."

"Detonate a Power Bomb on the floor to blast your way down to the route to Area C."

SHUT THAT DOOR (pg. 41)
"Use the speed booster to zoom across the platform before the automatic gates close to block your path. The ceiling at either end of the corridor can be destroyed by turbo bombing to enter a narrow hidden passage above." 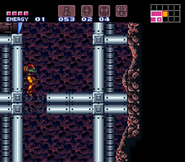 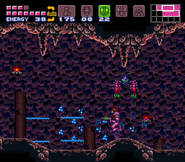