The "Ice Beam room" is a room in Norfair. It appears in Metroid and Metroid: Zero Mission. A different room that serves the same purpose appears in Super Metroid, also in Norfair.

In all games, this room contains the all-important Ice Beam, which Samus will need for the Metroids in Tourian.

In Metroid, it is one of two rooms where the Ice Beam can be obtained, with the other being in Brinstar. Because beams do not stack in the original game, Samus cannot carry the Wave Beam and Ice Beam at the same time. Therefore, if she collects the Wave Beam she will need to re-obtain the Ice Beam from either room before entering Tourian.

Regarding appearance, the room resembles other item rooms throughout Zebes, with the difference being that there is lava underneath the floor. If Samus lays a Bomb in the floor at the base of the wall under the statue, she will open a secret tunnel into a hidden back room. This room is constructed out of bricks and inhabited by a small group of enemies. There is an open gap in the floor that Samus can fall into if she is not careful, filled with the mentioned lava. From here, Samus can continue on through Norfair back out to the purple-bubble shaft.

In Zero Mission, the room is now encased in a small chamber that appears to be constructed out of Chozo material, with dark blue panels in the background. The lava is now shallow and cannot be entered. When Samus enters, the door locks as a Green Hatch, preventing her from backtracking. The Ice Beam can now only be obtained here, with the other room in Brinstar containing a standing Chozo Statue that directs Samus to this room. After Samus collects the Ice Beam, she can morph in the Statue's hands to replenish her energy and Missile Ammo.

The back room is now accessed at the base of the wall, under the platform the statue sits on. It has changed into a purple cave, with two pillars on either side, one of which is in midair, and a ceiling lined with stalactites. A single Ripper floats in between the pillars. It acts as a hidden tutorial for the Ice Beam, as Samus can freeze the creature and use it as a platform to climb over the left pillar and leave the room.

In Super Metroid, a new room on the upper left of Norfair has the Ice Beam, and the original room is no longer accessible. Under normal circumstances, Samus now needs the Varia Suit and Speed Booster to access the Ice Beam, but the latter can be skipped with the Mockball technique. It is a much smaller, dead-end chamber, insulated from the extreme heat present in adjacent rooms. The background is a noticeably purple cave wall. As with the original room, the Ice Beam is contained in an Item Sphere in the hands of a Chozo Statue, this time seated against the right wall.

The Super Metroid room has no enemies.

Ice Beam (pg. 18)
"With this blaster, you can freeze enemies and use them as platforms."

051 ice beam (pg. 40)
"At long last, you'll reach the destination that the Chozo Statue in Brinstar placed on your map. Grab the Ice Beam then roll into the cradle of the beam's statue to replenish your energy and missiles."

052 BOMB OUT, BEAM UP (pg. 41)
"When you turn to leave the room where you collected the Ice Beam, you'll discover that you don't have the power to open the room's green hatch. Roll under the Chozo Statue that held the Ice Beam, and bomb through the wall. In the next room, use your new beam to freeze the armored flier, then leap over the barrier." 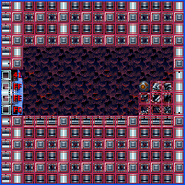