Adds the ability to freeze targets to Super Missiles.

Ice Missiles (アイスミサイル Aisu Misairu) are a type of Missile used by Samus Aran in the Metroid series. As the name implies, these Missiles strike the enemy with extreme cold, providing a freezing effect when the Ice Beam may not be available.

In all three of its current appearances, the Ice Missile completely replaces the previous Missile type.

Ice Missiles appear in Metroid Prime 3: Corruption, chronologically the first time Samus used them. While they have the ability to slow down and freeze enemies, these Missiles can also be used to create temporary platforms in liquid Fuel Gel and to remove White Blast Shields. Instead of immediately freezing enemies upon contact, the Ice Missiles in Corruption will explode and damage the enemy in a similar way to a normal Missile. During the explosion, ice shards are released, which then compact around the enemy and trap them in an icy 'shell', which impedes their movement or freezes them completely. Notably, if the enemy is killed in the initial explosion, the shards will not vanish. If the target is not entirely frozen, its movements will slow to a crawl. A second ice missile will then freeze it completely.

Ice Missiles are particularly effective against Warp Hounds and their masters, the Reptilicus. Phazon Metroids, (despite extensive mutation) retain the species' vulnerability to cold. Strangely, though, these enemies all have a way to avoid the Ice Missile: Warp Hounds and Reptilicus teleport and Phazon Metroids can warp out of local spacetime, which means Samus usually has to find the right opportunity to use them against these creatures.

Samus acquires the Ice Missile after defeating Rundas in the Temple of Bryyo. The power-up was a result of Rundas' cryokinesis.

During the events of Metroid Fusion, Samus is infected with X Parasites. A vaccine containing Metroid DNA is administered by the Galactic Federation, and she recovers. On her mission on the BSL research station, the Federation correctly assumes that because Samus now contains Metroid DNA, she has inherited a weakness to cold, and so would not be able to tolerate the use of the Ice Beam in conjunction with the Fusion Suit. The Federation subsequently supplies Ice Missiles instead, so that the use of a freezing effect in combat is still available. This implies that Missiles are not as closely integrated to Samus' body when compared to Beam weapons. The tips of these missiles are colored orange, and deal 33% more damage than Super Missiles, (from 30 to 40 damage) or 4 times as much damage as Normal Missiles.

In the game, these are later upgraded to Diffusion Missiles, which augment their freezing range with a charge capability, allowing them to freeze targets in an extremely large area. Their appearance and effect resembles a cross between a Power Bomb and a Super Missile.

Ice Missiles return in Metroid Dread, as first revealed by Volume 6 of the Metroid Dread Report. They are acquired by destroying E.M.M.I.-05IM in Ghavoran.

In addition to their typical use on enemies, they are required to destroy the fiery Enky. Although the Ice Missile can freeze certain plants in Ghavoran to make them last longer as platforms, most frozen enemy creatures cannot be used as midair platforms, as Samus will simply take damage on contact (with the exception of small wall-based enemies such as the Sunnap). Hitting a fully-frozen enemy with the Melee Counter will instantly kill it. Firing an Ice Missile out of lava while submerged in it will negate its ice properties, reducing it to a regular Super Missile.[1] Firing within lava causes the Ice Missile to melt.[2]

"Use Ice Missiles to freeze enemies for a limited time. Samus can walk on frozen enemies."

"The Ice Missile upgrade allows Samus to freeze certain enemies, but the effect lasts for only a few moments." 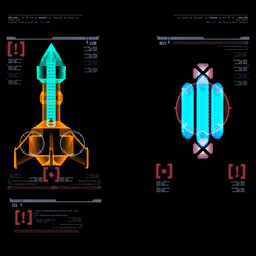 The Ice Missile enhances your current Missiles and allows the freezing of enemies and certain liquids.
Press

to fire an Ice Missile. Target and lock on with

to fire a Homing Ice Missile.

Enemies struck by an Ice Missile will be enveloped in shards of ice for a few moments, slowing their movement. Enemies who have been weakened in combat may freeze entirely and be unable to move or attack.
Some liquids, such as Fuel Gel, are highly susceptible to cold and will freeze when shot. Frozen gel will only remain for a short period of time before shattering.

"A missile that has a freezing effect. Samus can easily destroy frozen enemies with follow-up attacks. Some enemies can even be used as platforms."

🥶 Ice Missile: Freeze enemies in their tracks, destroying them with a follow-up or even using some as platforms.

Nintendo of Europe/UK
"Additional Arm Cannon upgrades available to Samus in #MetroidDread include Ice Missiles that freeze enemies in their tracks, and Storm Missiles which can lock onto five different targets at once (or one enemy five times!)."[4]

An Ice Missile fired in Corruption.

Samus fires an Ice Missile at the target.

The target is surrounded by shards of ice.

The shards compress around the target, impeding movement or freezing it entirely.

The effects of an Ice Missile on a Space Pirate. 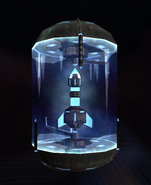