Luminoth, prior to going rogue

Ingsmashers were combat robots designed by the Luminoth for literally smashing Ing in battle.

Having gone rogue after being seemingly left without maintenance for an undetermined time, these Ingsmashers will attack anything detected by them without mercy, including their Luminoth creators. Despite this, however, they are still extremely protective of their home, Sanctuary Fortress. They can adjust their shield-orbs to protect against a variety of beam weapons. Opposite-polarity beams will do damage; when an Ingsmasher's shield glows purple, Samus must use the Light Beam, and when it glows white, Samus must use the Dark Beam. Ingsmashers have Missile Launchers for long-range attacks, and they can also pound their orbs into the ground, sending out shockwaves.

The fights against the Ingsmashers are extremely similar to the Elite Pirates of Metroid Prime; they have similar body shapes, similar weapons, and they also only spawn from their dormancy once (except in the case of a specific Ingsmasher in the Hall of Combat Mastery, which can be defeated, but will have reappeared by the next time Samus enters the room.). They can be instantly destroyed with Power Bombs or a well aimed Screw Attack even with their shields activated.

Ingsmashers were initially used by the Luminoth for both heavy security (protecting areas of key importance, such as the entrance to the Sanctuary Fortress) and combat support. For some reason, Ing rarely possess these powerful mechanoids, but some Dark Ingsmashers do patrol the Ing Hive and act identically to their light counterparts.

Ingsmashers are found in the Hall of Combat Mastery and Reactor Access.

Inactive
"Tactical scan complete. Target mechanoid is an inactive combat drone. Unit is offline and in power-conservation mode. No command signals are being received. Combat systems offline. Defense grid is not energized. AI does not respond to transmissions."

Designed to fight alongside the Luminoth, the Ingsmasher now seeks to destroy them. In close combat, it smashes its energized fists into the earth to send out powerful shock waves, then pulverizes any immobile prey. It will fire salvos of missiles at long-distance quarry. It uses an energy shield in battle that can be adjusted to protect against a variety of beam weapons. The shield can be overloaded by opposite-polarity beams, however, damaging the Ingsmasher in the process. 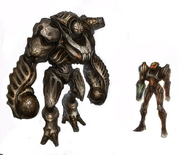 An Ingsmasher frozen with the Entangler, Hall of Combat Mastery.