First required use of the Grapple Beam

The "Interior Lake" is an unnamed room in Super Metroid very near the Landing Site in Crateria. As the name states, it is a room mostly filled with water with a column in the middle with a Missile Expansion in top of it. The room normally requires the Grappling Beam, Gravity Suit, or a well timed Shinespark to cross.

This room does not exist in the Metroid: Zero Mission version of Crateria.

There are many ways to go through this room without the use of the Grapple Beam. As Power Bombs are needed to access the room, the room cannot be crossed before they are acquired. There are three methods of crossing the room without the Grapple Beam, each with varying degrees in difficulty, speed, and items required. The simplest method is by using the Speed Booster to Shinespark horizontally across the room, usually through the Missile Expansion. This Shinespark can be charged up in the room to the left, but requires a Spin Jump to be preformed to reach the proper height and avoid the steps leading up to the door.

The second method is by using a Diagonal Bomb Jump across the room, usually using the column in the center as a resting point before the Bomb Jumping is resumed. This only requires the Bomb to preform the trick, and the Power Bomb to enter the room. This method is considerably slower and more difficult than the previously mentioned method, but it can be preformed earlier, allowing Samus to enter the Wrecked Ship, defeat Phantoon, and acquire the Gravity Suit before ever defeating Kraid, or entering Norfair, if used in conjunction with the early Power Bomb Sequence Break in the Red Tower.

The third and final method involves using a Continuous Wall Jump (CWJ) to Wall Jump past the entire room. This is the fastest, but most difficult method to cross this room early, requiring many pixel-perfect jumps, and Wall Jumps to execute correctly. This method can be done at the same time as the one mentioned directly above, but is much faster and more useful for Speedrunning. 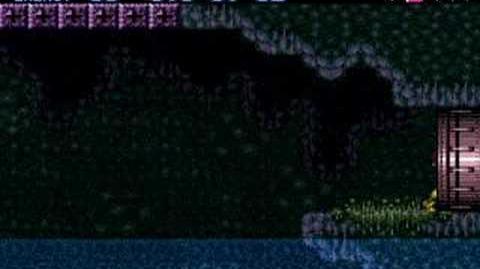 Super Metroid - Crossing Missile Lake
A demonstration of the CWJ being used to cross the Interior Lake.