Wikitroid
Register
Don't have an account?
Sign In
Advertisement
in: Pages in the real-life POV, Companies, Toys

Jakks Pacific is an American company that designs and sells consumer products and toys under a number of different licenses. In late 2014, it was announced that as part of its World of Nintendo line that Jakks would be releasing figures of Samus Aran (4") and a Metroid (6"). Released in April 2015, the Samus figure's sculpt was based on her design first seen in Metroid Prime 2: Echoes and came with the Morph Ball as a "mystery accessory", represented on the packaging by a white Screw Attack symbol. The Samus and two Metroid figurines are bundled in a package for EB Games in Canada.

This sculpt would be reused for subsequent waves as Gravity Suit and Phazon Suit variants, both including respectively colored "Power Balls". Additionally, an exclusive version of the Varia Suit Samus with metallic paint was released, as well as a special edition "trophy" version painted entirely gold.

The sculpt of the 6-inch Metroid was based on the Tallon Metroid's design in Metroid Prime, and featured articulated mandibles and a soft membrane. A 2-inch, non-articulated "mini" version of the Metroid would later be released, with a transparent plastic stand to create the illusion of floating. Two versions of this were created: One with a soft membrane and another in hard plastic.

Back of the box 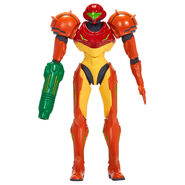 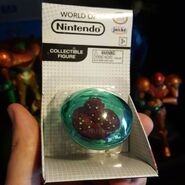 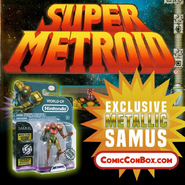 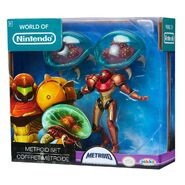 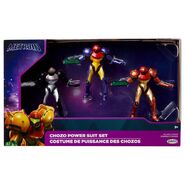 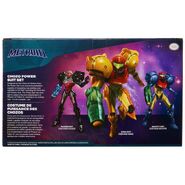 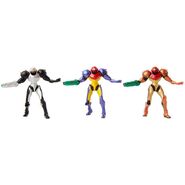 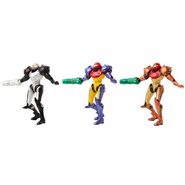 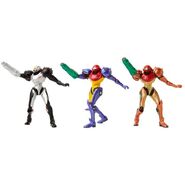 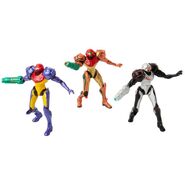