Jessica Erin Martin is an American actress and film producer born in Seattle. She was cast in her first video game voiceover as Samus Aran in Metroid: Other M (similar to the Japanese actress for Samus in the same game, Ai Kobayashi, although the latter had more experience than the former). Her role as Samus was criticized due to her tendency to have Samus deliver her monologues and dialogues in a monotone voice. This had been the result of Yoshio Sakamoto ordering her to deliver them in that manner in order to match Ai Kobayashi's delivery of the Japanese voice track (as in Japan, a character who talks stoically during a tense situation is considered fearless).

Martin has affiliated herself with fansite Shinesparkers on at least three occasions: for January 2011, she sent them a video consisting of her playing a guitar and singing with an onscreen message thanking the Metroid community.[1] In June 2011, she donated a personalized autograph from herself as the grand prize of a joint haiku contest between Shinesparkers and another fansite, Metroid Headquarters. In August 2011, she and other members of the Metroid community appeared in a Shinesparkers-created 25th anniversary video. [2] She also appeared in their video for the 30th anniversary. Martin was approached by DoctorM64 to reprise her role as Samus in the ending of AM2R, but she declined due to legal issues preventing her from voicing Samus in any unofficial media.[1]

Martin did not return to voice Samus in Super Smash Bros. for Nintendo 3DS and Wii U. [2]

Bitmob: Was it difficult figuring out who should voice Samus?

Nate Bihldorf: It was tough, certainly...but no tougher than with any of our other properties. We went through the same casting procedures like we usually do. We had a ton of auditions....

Bitmob: I mean, is there more pressure on you guys because this is a traditionally mute character?

NB: I think so. The beauty of it is, we listened to the auditions then sent them over to Sakamoto-san, who's "daddy" [laughs]. He's the father of the character. We let him listen to the voices and let him sync it up with what whatever voice he was hearing in his head for Samus.

Bitmob: Does he hear the original Samus in English in his head, then?

NB: For him it's more about the timbre in the voice and the way it sounds. Of course, we can say, "OK, this inflection sounds great" -- stuff that's more particular to the English voice that he may not pick up on. But what he's really listening for is something else. It's the quality of the voice...the method of delivery that matches what he hears when he's in Samus' head.

Having him run that process lets us sleep easy at night. We want to bring his vision to life, you know? Localizing the game is all about that -- all about bringing their vision over here and making sure it's true to how he sees it. Hopefully we've accomplished that.

Bitmob: Who is the voice actress? Someone we should know?

NB: I don't think she's worked in video games before. Her name is Jessica Martin. She's done a lot of dramatic work...a lot of stage work. She's a local actress up in Seattle. She did an amazing job and was great in the studio.

After the game launches, we may make her available to you [media], but I don't think we're allowing any contact before that, just because we don't want her dropping plot points....

Bitmob: Yeah, sometimes those actors don't know what they can or can't say, which is good for us.

NB: [Laughs] Yeah, we talked to her about it, but obviously, we don't want her to give up any choice bits of info about any lines that she's recorded.

But she was amazing. It's been a very long recording project -- we've been doing this for over a year. I mean, in bits and pieces -- I don't mean recording for a year straight. That'd be the longest game of all time. [Laughs]

Like I said, she didn't have any video game experience, so it wasn't like she was coming in, hanging her coat up on a hook, and banging out the lines. It was something new for her, and she was great. 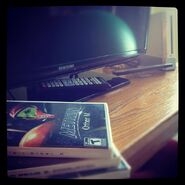 Jessica's Wii and copies of Other M and Metroid Prime 3: Corruption: [3] 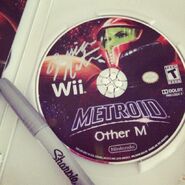 Other M disc signed by Martin.[4] 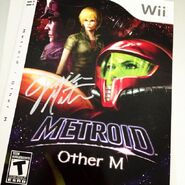 Other M case signed by Martin.[5]

Print signed by Martin for a fan.
Add a photo to this gallery

Retrieved from "https://metroid.fandom.com/wiki/Jessica_Erin_Martin?oldid=273102"
Community content is available under CC-BY-SA unless otherwise noted.