The Boots come with matching bracelets (which are purely cosmetic), and are used in her new recovery move, Boost Kick. Masahiro Sakurai, in the April 2014 Nintendo Direct, explained that these boots were created out of a viewed necessity to "toughen her up," as Zero Suit Samus was not very powerful in Super Smash Bros. Brawl (despite being fairly highly ranked in the majority of fan tournament boards' tier lists). The Jet Boots are worn over the boots on the otherwise identical Zero Suit from Metroid: Other M, which controversially featured Samus in larger, clunky heels. The heels of the Jet Boots have similarly generated some criticism.

Zero Suit Samus wears the Jet Boots during her brief appearance in A Piercing Screech, Ridley's character trailer for Super Smash Bros. Ultimate. She uses them to escape from a blaze caused by Ridley, and to lunge at him as the trailer ends.

Samus uses the boots in her double jump. 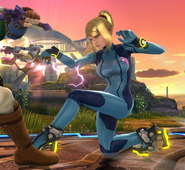 The Jet Boots seem to have a posability problem, as they can bend unrealistically.

New Style Boutique 2: Fashion Forward
Add a photo to this gallery
Retrieved from "https://metroid.fandom.com/wiki/Jet_Boots?oldid=272177"
Community content is available under CC-BY-SA unless otherwise noted.